“A Well Regulated Militia” Part 1 of 6 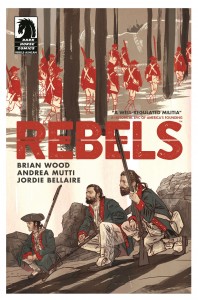 “In which young Seth Abbott is introduced to the war for independence and plays a pivotal role.”

REBELS, the latest series from Brian Wood and Dark Horse Comics, takes us back to the Revolutionary War period in American history for some stellar historical fiction. The hook here, however, is not some alternate history or vampire hunting or Washington-as-square-jawed-liberator, but rather a focus on “the everyman”: the farmers, the militiamen, the tall tales, the street-level heroes, the women and children of a burgeoning country. Wood also promises to delve into the Native American tradition as well as he takes REBELS across the ground-level action that “happened” during the Revolutionary period.

Of course, this is historical fiction, so very little of this is factually accurate. But that doesn’t really matter, because Wood is more interested in capturing the tone and tenor and realities of the period and how those tendrils of family, civic duty, activism, faith, etc., reach into our lives today. As he says in the back-material, he sees his own childhood in Vermont in the story of Seth Abbott and the New Hampshire militiamen. And that’s the power of good historical fiction: relevance. 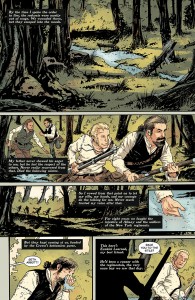 REBELS #1 follows Seth through his childhood in the backwoods of New Hampshire and up to the very first days of the war. We see his childhood, when his complicated relationship with his father drives his every action; we see him grow up into adulthood and emerge as a leader and voice against the tyranny of New York Red Coats co-opting the land of the farmers. We meet his friends and the woman who will be his wife. We follow Seth on this personal, quiet journey through the Revolution, and we always feel like it is important and relevant despite its smallness. The violence (and there is one shocking scene about midway through the book) has weight because the characters are common; the love and friendship and bonds of war more intimate because the characters are normal.

Andrea Mutti and Jordie Bellaire absolutely stun in the artwork here. I don’t know why we associate this rugged naturalism with the period, but Mutti’s style is perfect for a book set during the Revolutionary War. There are so many beautiful scenes that juxtapose the untamed woods with the marching Red Coats (and Bellaire’s red is vibrant as all heck in this book). Even Jared Fletcher’s lettering shift between the comics font in the dialogue and the “parchment” style writing in the narration boxes is awesome in that it makes this comic something unique and special. It’s just a gorgeous book cover-to-cover.

BUY. Wood is doing something very cool here in REBELS. There is no Romanticism in this history—no superheroic statesmen and generals of Independence, just “real” people on the ground fighting for their homes. These are the “stories” of the Revolution. Fictional though they may be, they are still true.