Billy, more commonly known as The Will, blew into the comic scene with a metaphorical bang. First gracing comic pages in opening issue of the space opera series Saga, creators (Brian K. Vaughan & Fiona Staples) quickly established The Will as a formidable enemy for the series protagonists. But in a story world where heroes and villains come in varied shades of good and evil, the on-going series soon revealed a softer side to the cape toting assassin. So much so, that in his seventeen issue stint, The Will carved himself a space alongside a long list of comic book anti-heroes – all set to challenge our pre-conceived notions of what it means to be a hero.

A Code to Live By

Outside the law, that’s where you’ll find the anti-heroes of fiction, and The Will is no exception. Assassin for hire and all-round moody guy, The Will, like most of his sort, has little time for the rules of society. But that’s not to say there is no honour among thieves. Though they spit in the face of society’s laws, the anti-heroes of our story universes often operate under their own strict moral code. And it’s usually one we all can agree with.

A prime example: The Will’s attempt to rescue Sophie, the slave girl. At first unfazed searching for comfort in the most depraved of places, The Will quickly changes his tune when he realizes the depravity comes at the cost of an innocent child – Sophie. To save her, The Will goes to extreme lengths, dealing death and breaking laws, while the reader cheers along with every panel.

Anti-heroes and their self-serving moral codes take matters into their own hands when it comes to serving justice. And for that reason, The Will’s complicated sense of right and wrong makes for excellent reading.

Without his fictional connections, The Will would be a little more than a violent grump. The real X-Factor in the anti-heroes adventures, lies their interactions with other characters. The Will’s relationships throughout the series, new and old, long-lived and fleeting, all sway the course of his moral compass.

Throughout Saga, Vaughan & Staples reveal The Will is an employee, an ex-boyfriend, a pet-owner, a hot-head, a brother and a son. All of these outside influences and identities not only make the character easier to root for, as he rockets across space hunting his next target, but each of his relational predicaments provide a fork-in-the-road for his next actions. In the face of a broken heart, a law-abiding character may do little more than mope, an anti-hero, however, could start off on a rage-fueled vendetta. Shown an act of kindness, regular folk might offer thanks, while an anti-hero grumbles at the imposition of owing another.

In the case of an anti-hero, there is something to be said about the company a character keeps. 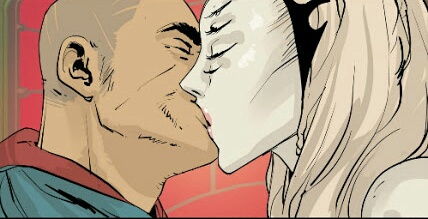 The Will, like most of his anti-hero brethren, sports some hefty scars. The emotional kind, which we readers enjoy, because if a character’s got some battle wounds on their heart the twists and turns of their journey become all the more interesting. But The Will’s got scars of the physical kind too, and even in the war torn universe of Saga, his scars instantly paint him as one that works outside of the ‘norm’.

Though scars are a common feature between anti-heroes and villains alike, unlike the villain, the anti-hero’s scars usually tell more of a story, with each scar serving as a reminder, be it painful or joyous. And The Will’s history, is written all over his face. In world where flaws are hidden, rather than embraced, The Will stands defiant. Because we’re all heroes of our own story, anti and hero alike. 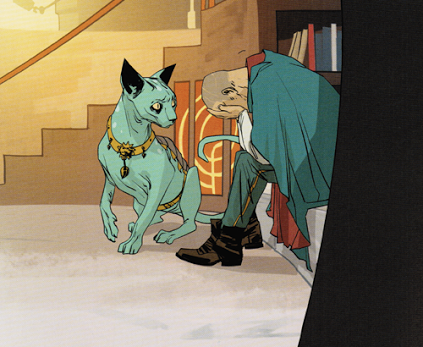 Follow
In between pondering which fictional universe she'd most like to live in, Rebecca devours comics, pop culture and anything with a solid story. Since discovering comics, and the endless realm of stories that can be told within their pages, she has…