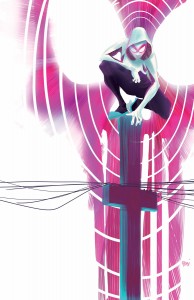 As Spider-Woman, Gwen Stacy has had a tough time lately. Between losing a good friend, quitting the Mary Jane’s, participating in a huge multi-universe war against demon-vampire totem gods, and oh yeah, being the most hated/feared person in New York City; Spider-Gwen really can’t catch a break. I’ve had my reservations about this series after the first issue. Between pacing and characterization issues, this just wasn’t the comic book I expected and wanted it to be. This issue is a vast improvement however, and if it continues, I have no doubt that it will get to the level of amazing story-telling that I know it can reach. 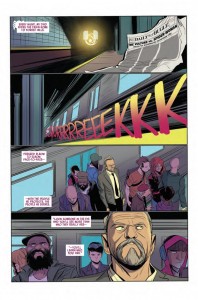 My biggest problem with Spider-Gwen was that I couldn’t quite connect with her character. In the first issue, it was because there was too much inner narrative going on and not enough scenes where Gwen Stacy is interacting with other characters. In the second issue we got more of that but for me, there was still a bit of a disconnection. With this third issue, Latour finally got me invested emotionally in the character and the universe and that is the most important part of telling an underdog, ground-level superhero story. The issue starts off with a confrontation between Gwen and her father. While there was still a bit of detachment between the end of the second issue to this confrontation, the emotional weight of this scene overpowered that disconnect. Gwen is obviously having trouble balancing her two lives and it’s great to see that she’s able to confide in her family when it all gets to be too much to handle alone. While Captain Stacy doesn’t agree with her vigilantism lifestyle, he’s still there to support her as her dad.

One of the primary reasons for the emotional dissonance with this series was that it started off in the middle of the action. With the pacing being as poor as it is, starting in medias 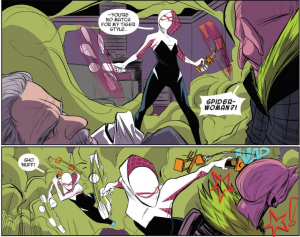 res wasn’t the best direction to go. In this issue, we got to see more of Gwen’s state of mind and why she’s determined, so obsessed with her mission and that emotional hook is what finally got me invested.

There are still a lot of scene transitions that didn’t quite read as seamless as I would have liked, primarily the last scene in the issue. Also, while their fight scenes do look spectacular, the two antagonists here still don’t resonate with me. It’s not something that I particularly need when it comes to superhero comics but I would have liked to have a little more development, especially with the second antagonist.

The art by Robbi Rodriguez and Rico Renzi never ceases to amaze me. The action scenes in particular are really spectacular. Both battles are done with the backdrop of a trippy nerve gas attack and that creates some great effect 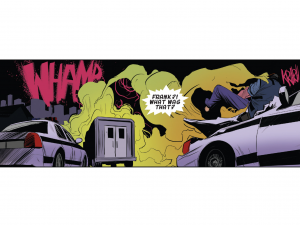 s. One of my favourite things about the art is the lettering for the sound effects. In one wide-shot panel, there’s a sound effect of someone landing a hit in the background on the left but all you see is the guy getting thrown onto a car in the forefront of the right side of the panel with the crunching sound effect in the corner. Another panel focuses on somebody getting electrocuted and the colours look absolutely gorgeous with the electricity in the panel.

Verdict: Spider-Gwen hasn’t been on the top of my pull-list despite my best tries but it’s only now in the third issue that I can relate to Gwen and that’s key for me. The art is by far the strongest part of this series. The dynamic momentum Rodriguez creates during the action sequences really makes the fights come alive. It really suits the acrobatics that a Spider-related book is supposed to have and Rodriguez and Renzi manage to do it in a really unique way. Check it out or wait for trade if you’re like me and you really want to like this series but haven’t been sold on it thus far. The story is getting stronger despite a few hiccups and if it continues to improve, I’m sure this will make a great collected trade.