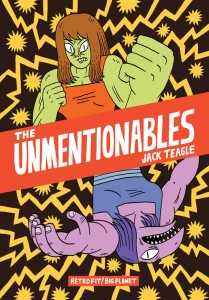 The Heels hit the bank and it’s up to the Faces to step in and save the day!!!

Everything about this comic is old school, self-aware, newsstand comics fun. Jack Teagle’s distinctive black and white artwork here is reminiscent of those classic days of the Indie Comics scene—Daniel Clowes, the Hernandez Brothers, The Teenage Mutant Ninja Turtles, etc. And the narrative—the good guy Wrestlers take on the bad guy Wrestlers to thwart the latter’s attempt to rob a bank—is so out there and different from everything else on the stands. Teagle also gives Lizard Woman a little bit of pathos as he includes a scene in which she calls her mother to check in on her daughter, whom she has to leave at home while she works as a professional wrestler. It’s surreal and real and awesome, and Teagle is clearly having fun with each and every panel.

Teagle is a UK based artist whose work can be found on his website. Looking through the rest of his illustration work (which includes an early version of The Unmentionables in color), Teagle is clearly a fresh talent with an innovative, engaging cartooning aesthetic. His work embodies that ‘90s, post-modern pastiche/pop driven style, and I hope his work in comics continues, either at indie houses like Retrofit an Big Planet or at the more mainstream publishers.

CHECK IT OUT! The Unmentionables mixes wrestling with superheroes with work-place melodrama. Oh, and it’s anthropomorphic, cartoon-esque wrestlers thwarting crime in old school comics fashion. Like, why not?