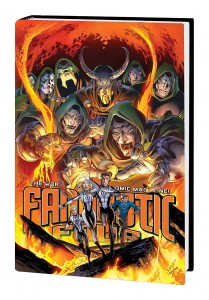 ce it has been a while since the last time I’ve posted, I thought it would be interesting to a look at an omnibus. Omnibuses, or ominibi as some like to call them, are large collections of comics in the oversized format that are usually tailored to a specific run in a series. More often than not, these collections, which have only started to appear in the past 10 years or so, focus on specific writers or creative teams. While an omnibus is usually expensive (available at around $75-125) they are a pretty great value depending on what you are getting, and are excellent display item for a comic lover’s library. Both my wife and I own a few of these and I’m a big fan, usually leaning towards the larger variety that Marvel puts out, not that there aren’t some excellent collections available from other publishers.

While the massive books have a lot going for them, there a few negatives. Some complain that the collections are just too large, and therefore make it difficult to read comfortably. If you have ever held the second volume of Fantastic Four by John Byrne, you know exactly what I’m talking about. Probably the most annoying thing about an omnibus is availability. Many are out of print shortly after their release, and because of this, can go for high prices on eBay or Amazon. Just look up the first volume of Perez and Wolfman’s Teen Titans or some of Brubaker’s Captain America for reference. Figuring out which ones that will go out of print is usually hard to predict, so at times when buying one, you’re not sure if you’re investing in something that’s going to be hard to find later, or something that might be worth 40 dollars online in a few months, which can be incredibly frustrating. To relieve my fears of this turning into a passionate tirade on the format, I’d like to move on to focusing on a specific volume that I recently picked up, which will allow me to look at both the run’s merit as well as the physical quality of the omnibus.

Matt Fraction’s run on Fantastic Four is truly a bizarre choice for Marvel to collect into an omnibus. When his series 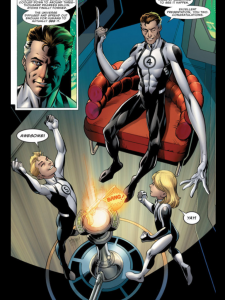 was announced in 2012 as a part of Marvel Now!, I remember there was a large amount of excitement. He had recently enjoyed a hit with his Hawkeye premier and was a fan favorite thanks to The Immortal Iron Fist, The Mighty Thor and The Invincible Iron Man. He would continue the tradition established by the book’s predecessor, Jonathan Hickman, by writing two series. The main Fantastic Four book, illustrated by Ultimate Spider-Man’s Mark Bagley, would focus on Reed as he takes his family on a year-long vacation through space and time, which is a front for him to find a treatment for an illness that he discovers is slowly killing Johnny, Sue, Ben and himself. While the family will be traveling for what would seem to them is a year, would actually be only four minutes to the substitute heroes asked to protect New York and the Future Foundation in case something goes wrong during their trip, which of course, does. This would be the setting of the second book, FF, and would have the artistic team of Mike and Laura Allred on their first regular series for Marvel since X-Statix. The series would focus on the replacement team of She-Hulk, Medusa, Ant Man (Scott Lang) and Darla Deering, Johnny’s pop singer girlfriend who sports an outfit that gives her the physicality of The Thing up to the neck, as they deal with personal struggles and the challenges of taking care of kids in the Future Foundation, the school established in Hickman’s run.

The series starts off incredibly strong. The comic originally shipped each book once a month, rotating between the two every two weeks. For the first five or so issues of each, it had a wonderful pace, with FF being the obvious stand out comic. After this point, the series began to show a serious dip in quality. Bagley’s art became hindered by what appeared to be a lesser skilled inker around the latter half. The main series also felt distracted by dragging out a story that was more complicated than it was interesting, and FF suffered (albeit not much thanks to the Allred team) by a sense of being burdened by the weight of its less inspired sister book. Readers were losing interest, and it appeared that Fraction was as well as he moved on to his creator-owned work over at Image. By the end of his run Fan Four veteran, Karl Kesel and Chris Sebela were brought in to tidy up the scripts for Fantastic Four, as would Lee Allred on FF, and Bagley had been replaced by fill-in artist Raffaele Ienco. By January 2014, both books were brought to an end after sixteen issues each.

Unfortunately, all of the negative aspects of this run cover have possibly ruined some of the more interesting things about Fractions run. First, FF is great. It was consistently funny, the Allreds’ art give it a timeless feel, and it has some incredibly well written characters. Scott Lang’s character arc might be the most successful thing from both series as he struggles with accepting the murder of his daughter Cassie (Stature) from Avengers: Children’s Crusade, and how he seeks revenge against Doctor Doom. Another common thread throughout both books is Fraction’s homage to the Lee and Kirby run of the sixties. Every issue of FF has a reference to something that occurred with the corresponding issue from their run, even going as far as to have Fraction, Allred and Tom Brevoort make an 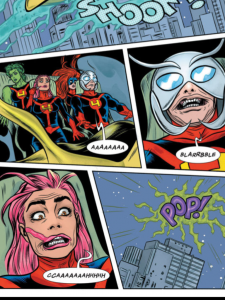 appearance in issue 10. Easily one of the biggest highlights from the collection is Fraction’s indirect tribute to Jack Kirby’s early life in issue 10, when Ben travels to Yancy Street to protect his family from the mob.

The collection itself is great. As usual, the oversized pages bring out Bagley and the Allred’s art; of course on the latter issues of Fantastic Four, that isn’t exactly a compliment. The book’s binding is strong, and the paper stock, though thinner than higher quality paper from the older omnibuses that Marvel have put out, allows for a more comfortable reading experience. Under the dust jacket is an excellent mural by Bagley of both teams, and the book is supplemented with various sketches and a variant galley which is a ton of fun to look at. Also included is Fraction and the Allred’s Scott Lang short from the Marvel Now! Point One #1 comics. One thing that does bother me is the placement of the Age of Ultron tie-in. It makes sense to include it in the collection, being written by Fraction and serving as part of his narrative, but its placement at the end of the collection without any form of annotation makes its inclusion seem unnecessary to main story, and more like a weird bonus. Events in this issue are later brought up in the main series as a dream of Franklin and Val’s and effect a decision based off of what they experienced. It would have made more sense to place it before issue six with a note of reference preceding it.

I can’t say I would recommend this to anyone aside from die hard Fantastic Four fans. While its excellent presentation is welcomed, especially for the FF issues, it’s simply not a great run for a regular Marvel fan to justify the purchase. Unfortunately, this is the only option if you are only after the entire FF run in print since Marvel bizarrely published the first three issues in the Fantastic Four trade, and the FF trades without them, and without issues 14-16. Add that to the list of evidence that Marvel really didn’t know what to do with this comic. For Fraction fans, I would also say pass on this, it is simply an underdeveloped experiment in what is a stronger comics career.

Please let me know if you have any thoughts on Fraction’s run, or if there are any omnibuses in your collection!

Still want the book, but at a great price? Here ya go! (Instocktrades.com)