Nomenclature around what are essentially “not straight” people varies depending on who you ask and when. It could be LGBT, gay, queer, LGBTQ+, or any other assortment of letters. But for the sake of clarity, I’m just going to be using ‘queer’ to describe non-straight, non-gender conforming individuals. Now, where do these people fit into comics? Wondering where any specific culture, or group of people, fit into comics is a daunting question, mainly because ‘comics’ encompasses a lot of material. I’m sure there are a lot of characters from smaller publishing companies, or just from books that I haven’t read, that I will manage to leave out here. That being said, this look at where queer characters fit into comics and how they are represented is going to extend beyond just the behemoths of Marvel and DC. While a lot of progress is being made within the Big Two, companies like Image and independent publishers are doing a lot of the progressive work as well.

Early on within the medium there were characters that could have been perceived as queer, or might have been ‘coded’ as such in comic books and even in comic strips. Coding is when a writer or artist implies a character might be outside the norm, or uses language specific to a community that only they would pick up on. Authors like Oscar Wilde and Virginia Woolf used this a lot in early literature to imply homosexuality or queerness of some sort. For example, in the late 70s there were hints that Canadian hero Northstar (eventually the first gay superhero) and Captain America’s childhood friend Arnie were both gay, but it wasn’t stated outright, as Marvel had a specific policy forbidding the depiction of homosexual characters. Northstar eventually did come out 13 years later in 1992, but his sexuality was rarely discussed during that remainder of that run of Alpha Flight.

Over the years as the visibility of queer characters has increased, an easy and common way for creators to introduce new ones has been through teams or ensembles. The X-Men are a good place to start, because over the years their persecution has been seen as representative of different disenfranchised groups such 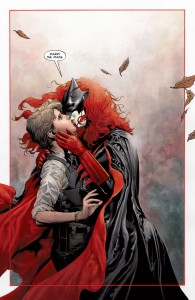 as LGBTQ people and racial minorities. That being said, the X-Men for the most part have been a pretty heterosexual group. The most high profile character would Mystique, who is bisexual, though that’s really only seen in her relationship with the little known Destiny. Chris Claremont had originally intended for Mystique and Destiny to be lovers and the biological parents of Nightcrawler (because, shape shifting) but, again, Marvel had a strict policy. Psylocke is also bisexual, but again just had a one-time fling with the even less known Cluster. A couple of the young mutants who attend the Jean Grey School for Higher Learning such as Anole and Bling are also gay but are fairly minor characters. Not actual X-Men, but mutants Rictor and Shatterstar, part of the X-Factor series, were eventually revealed to be in love and shared Marvel’s first on page same-sex kiss.

Other ensembles by Marvel that have shown a proclivity to include queer characters are Young Avengers and Runways. Right off the bat in Young Avengers the team had members Billy Kaplan and Teddy Altman, a gay teenage couple, and later the bisexual David Alleyne, lesbian Miss America, and bisexual Loki, were added to the roster. In Runways eventually Karolina Dean came out as a lesbian and started a relationship with the Skrull, Xavin. Skrulls are able to shape shift, and originally Xavin took on the form of a male on while on Earth, but fell in love with Karolina and changed into a woman for her, touching on the topic of gender identity as well.

If publishers want to add diversity to their ranks a lot of times queer side characters will be added to a series. One of the most notable is Renee Montoya, a detective in the Gotham Police Department, originally from Batman: The Animated Series. She eventually made her way into the comics and became the girlfriend of Batwoman Kate Kane. Other examples are the gay couple and tabloid reporters Upsher and Doff from Saga and Aaron from The Walking Dead. While these characters don’t necessarily have huge storylines for themselves, the added visibility of LGBTQ people is almost always a step in the right direction. But possibly the most important peripheral character in recent years is Alysia Yeoh, the Gail Simone created character and roommate to Barbara Gordon in Simone’s Batgirl series. A lot of the previous mentioned characters fall under the L, G, and B, but Alysia is one of the few in comics who are transgender. It is a hugely underrepresented group in every form of media, and it’s fantastic that Simone added this character not just for the sake of having her, but actually fleshed her out. Alysia has gone on to become a huge fan favorite. It’s great that even though Babs has left Gotham in her current series, Alysia has still made some cameo appearances.

So there has been a steady increase of queer side characters and team members, but what about lead characters? Those, unfortunately, are few and far between. Marvel currently doesn’t have any gay or lesbian lead titles, DC is ahead in that category, but only barely. The first ever lesbian lead superhero book was DC’s Batwoman that began with their New 52 re-launch back in 2011. While Batwoman has recently been canceled, they have announced a solo series staring the gay character Midnighter, which will be the first ever gay lead superhero title. DC also recently made Catwoman canonically bisexual. Marvel has three books with lead bisexual characters, Elektra, Loki: Agent of Asgard, and Angela: Asgard’s Assassin (there’s something in the water in Asgard apparently). While Elektra’s queerness wasn’t visible in her series, Al Ewing has said that he plans to explore Loki’s bisexuality and has already been somewhat queering his gender expression. I actually spoke to Ewing about this at London Comic Con earlier this month, I thanked him for playing with Loki’s sexuality and gender, and he said that it was something that we continue to need more of in comics. It’s always nice to hear creators talk about progressing representations. 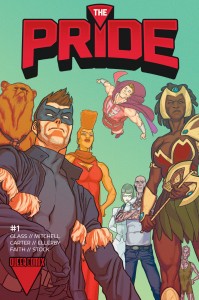 Away from the Big Two Image has recently announced a series with gay leads called Kaptara by the wacky Chip Zdarsky billed as a “comedic space epic”. There are also webcomics doing great work in this area, such as the teenage romance Always Raining Here that centers around two gay high schoolers. Even further away from the mainstream is the independent series The Pride. Writer Joe Glass and series artist Gavin Mitchell have created a series with a completely LGBTQ team of superheroes. These heroes are not just fighting super-villains, but also a critical and judgmental public. What’s so great about The Pride is that it doesn’t take itself too seriously. The characters are a subversion of queer stereotypes and the series has a great mix of serious and humorous moments. It’s also written in a way that makes book equally accessible to those reading about LGBTQ+ culture for the first time. Progress is almost always slow, but with independent books like The Pride, and a gradual increase in visibility and representation in mainstream publisher like Marvel, DC, and Image, we can see queerness emerging in an industry that many marginalized people look to for comfort and affirmation.

** Independent comics are incredibly important, especially ones that are brave enough to do things big publisher won’t. If you want to support The Pride you can find it though Comixology or their website www.thepride.bigcartel.com