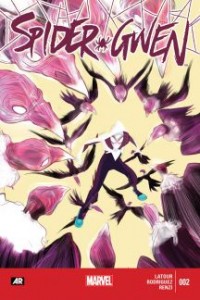 Given my last review, it’s no secret that I was left a bit disappointed with the first Spider-Gwen’s first solo series issue. Still, given how excited I was for this title, I want so much to love this series that I’m willing to give it an entire arc (maybe even two) before I decide whether or not to keep it on my pull list. Of all the issues I had with the debut, what I wanted most from the first issue was to have more Gwen than Spider-Gwen and we see a lot of it here in Spider-Gwen #2.

We left off with Gwen plummeting to her death in a weird call back to her infamous death scene from the canon-verse. But she’s Spider-Woman, and it’s just the first issue, so we know she has to survive. In this issue, we start off just after her fall. Gwen is safe and sound, if not mildly concussed. That might be the reason why her inner dialogue manifests in the form of (a hallucinatory) Sporktacular Spider-Ham. I’m not entirely sure if I’m a fan of this development but it does provide more scenes with Gwen as Gwen instead of a gender-bent Peter. On another note, Spider-Ham is HILARIOUS and even though I don’t know how I feel about him being a Jiminy Cricket to Gwen’s Pinocchio, I do love her crazy conversations with him (with herself as manifested in Spider-Ham’s image?).

This issue doesn’t quite reach the level of greatness I wanted it to reach but it’s definitely getting there. As much as her hallucinatory Spider-Ham conversations try to reveal her fears and motivations and as hilarious as they might be to readers, there’s still something about it that prevents a real connection. The transition scenes from her in the landfill to the Mary Janes’ apartment were a rough leap for me and also left me feeling disconnected. The whole issue also asks us to believe that most of the Gwen’s inner conflict derives from her own failures and her issues with her father. Using Spider-Ham to point it out helps us understand it but I’m still not completely invested because of that disconnect I feel due to the hiccups in pacing.

One of the things about the series that I was most excited about was getting to see what the other familiar Marvel characters are up to in this universe. We’ve seen glimpses of various familiar villains in new costumes but still basically fulfilling the same purpose as Spidey’s punching bags. The real treat is seeing familiar heroes (and one specific anti-hero) in very different roles. Frank Castle is on the hunt for Spider-Woman in a completely different capacity from his Punisher days. Matt Murdock is hunting Spider-Woman for his employer, the Kingpin. And poor Captain Stacy, he’s just trying to keep his daughter safe amongst all this craziness. At this point, the wider universe is much more interesting to me than Gwen’s inner conflict and the issues she has with the Mary Janes and her father but given that it’s primarily due to the storytelling pacing, it might change if I read the arc as a whole.

The art from Robbi Rodriguez and Rico Renzi continues to be spectacularly dynamic. I especially love the way they depict Spider-Ham. Though not a lot happens action wise, there are still some brutal images. The scene with Matt Murdock as he gives the villain’s monologue about why they’re targeting Spider-Woman is particularly striking. In main universe, Matt is both lawyer and Daredevil. In Spider-Gwen’s universe, he’s cast as a lawyer once again… but he’s the Kingpin’s lawyer. In many ways this makes the Man Without Fear, one of the most feared men in New York City and this issue does well to remind us of that. With Rodriguez’ pencils and Renzi’s colours, Matt’s villainous scene turns out to be pretty brutal and menacing.

Verdict: If you’ve already passed over the first issue, I’m not sure if this one will convince you to stick with it. For me, this follow-up does a much better job at telling a story but there are still some pacing and character issues that still don’t have me completely invested. Still, there are more strengths here than weaknesses and I have faith that this will get much better down the line. Check it out if you’re interested but don’t expect a complete turnaround.