Story and Art by Takashi Ikeda

In Ikeda’s Whispered Words, Murasame Sumika is faced with this situation.  Her best friend, Kazama Ushio, openly likes women.  She talks about her preference around others, and she is often dismissed as childish or strange.  Sumika listens attentively and offers the necessary support, but she feels a pang every time Ushio talks about a cute girl she saw.  You see, Sumika is a tall, athletic, brainy girl.  Ushio prefers girly girls, the kind that are petite, weak, and adorable.

Sumika hides her feelings from Ushio.  Her fear of rejection causes her to constantly deny her own feelings.  Like any classic shojo series, both parties hides their emotions from each other.  At times, Ushio sees through Sumika’s denial of feelings.  However, she resists accepting Sumika’s crush.  She continually states that Sumika is “normal” and cannot possibly really love her. 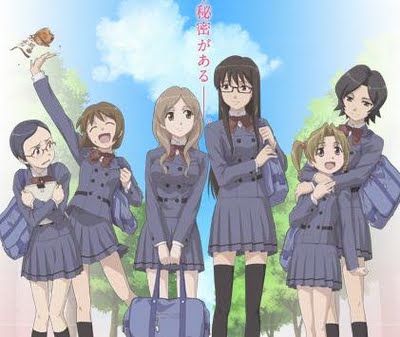 Though Ushio may know that Sumika loves her, she repeats to herself, “Love always falls apart one day.”  Her history of bullying and ostracizing leaves her apprehensive about opening up seriously to another woman.  Which, in turn, continues to support Sumika’s repression of love for Ushio.

Whispered Words is more than teenage frustration and jokes.  Beneath the story lies an element of truth, a look at the pain love causes.  Ushio, in a moment of uncontrollable rage, begins to furiously tear her room apart.  Over nine pages, readers see Ushio throw a tantrum very unlike the person she chooses to be in public.  The sweet, smiling Ushio cannot deal with her broken heart, and the only solace she has is destroying her small world.  The outburst shows that Ushio is more than the light-hearted, girl-obsessed character Ikeda’s initially shown her to be.  Through pain, Ikeda gives Ushio a turning point in the series.

The art style is simple and emotive.  The lines are clean, and Ikeda can pace a story like a true pro.  The supporting cast is vast, but she is able to distinguish character from each other visually as well as by personality.  The short extra stories add comedy as well as bonus information about the characters and their relationships with each other.

Whispered Words is a different kind of shojo story.  The yuri themes as well as the focus primarily on emotions rather than sex separates it from manga like Peach Girl, Mars, and Hot Gimmick.  The story is innocent, and Ushio and Sumika are the sort of characters you root for unconditionally.  The third volume, from One Peace Books, hits shelves on March 17th and wraps up the high school lives of Ushio and Sumika.