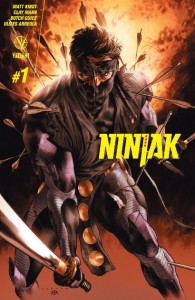 It’s been about a month since my turn on the Talking Valiant podcast, playing the role of the Valiant nube encountering this world for the first time. I loved what I discovered then, and I’ve been reading up. I eagerly awaited this first issue of the reborn  Ninjak solo series. I’d seen Ninjak in X-O Manowar and Unity, and liked him every time. As with many Valiant characters he is sometimes protagonist and sometimes antagonist, but always interesting.

Ninjak #1 is a whopper of a book, coming in at 40 pages. I was pleased beyond reason to see that there are two ongoing stories (both written by Matt Kindt) in the book. The first is Ninjak as he is. The second is a “Lost Files” story — Ninjak as he came to be.

Drawn by Clay and Seth Mann in what I’m coming to think of as Valiant house style, the feature tale flashes back and forth between Ninjak’s time as a billionaire kid (learning to love the ninja), and a current day sequence in which he encounters Agent Roku, a woman with magnificent red hair which is virtually prehensile and has tensile strength and edge enough to cut through the steel of Ninjak’s sword. She got this way through “genetic manipulation.” She’s the right-hand of a Chinese criminal weapons dealer lord high muckety-muck. Ninjak’s mission, should he choose to accept it, is to use the red head to work his way undercover into the muckety-muck’s gang.

The second story, shows us Colin’s first mission (before he was Ninjak). Artist Butch Guice is an undersung genius. The feeling given off by his illustration is very evocative. The mission is quite a bit simpler and honestly endearing — if you can say that about a spy story. I liked it a lot, and rather than simply being a “bonus,” it added genuinely to my enjoyment of the issue.

I learned some things about Ninjak that I didn’t know before. He’s a spy and he’s a billionaire. In the context of the main story, I did not find either of these things very interesting. The thing about a billionaire hero is … ugh, again? And the thing about spying is … it’s not ninja-ing! He’s the coolest ninja ever, and when he’s spying he’s not ninja-ing! In X-O Manowar and Unity he was all ninja all the time! That’s what I want out of the Ninjak main story.

(And I get it that I just contradicted myself because I really dug the back up story that was all spy, no ninja. BUT it was a pre-origin story, and it was damn charming.)

Verdict: Buy it. I have high hopes for this series. I will be buying future issues. But if I see too much of spy billionaire skulking around luxury flats with nary a sword in sight, I probably won’t hang on.