Pencils and Colours by Javier Rodriguez 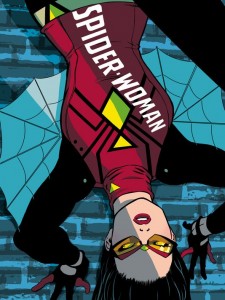 Jessica Drew has faced international infamy after being Skrull-swapped. She has been an agent of S.W.O.R.D. In her own words she went to “Hail Hydra high school,” and “Nick Fury University.” She’s been an Avenger, a New Avenger, and a Secret Avenger. Now, after all this, plus a multi-verse battle of Spider-people, she’s done. While the first couple of issues for this series were heavily integrated in the Spider-Verse crossover event, we finaly get the first issue we all deserved in Spider-Woman #5.

Outside of being annoyingly embroiled with the event, I had little problems with Hopeless’ take on Jessica Drew especially when it came to her internal dialogue. It’s great to see it fill up to its potential here with Javier Rodriguez to give life to her character on a visual level. The issue opens with Jessica on patrol in New York City and follows a very familiar narrative pattern. There’s a citizen in trouble, she rushes to help and we get to see the movement from here to there along with her internal thoughts as we go along. This is a pretty typical way to open up a new series/arc and the issue. The Unbeatable Squirrel Girl and Silk have also followed similar patterns in their own introductory issues and there’s a reason why it works so well. With a solid artist and writer, this familiar opening scene works well to (re)introduce Spider-Woman in the midst of her new super-heroine status quo while also catching you up on character information you might have missed if you haven’t been reading the previous issues. Personally, I hate the first page where they go “HERE’S WHAT YOU MISSED” and continue to give block paragraphs so to have it play out in the opening scene instead, in a way that helps introduce the character with her own voice, was really nice. 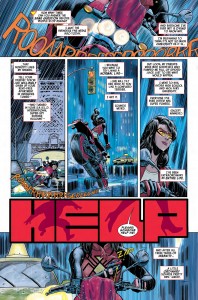 Unfortunately, the helpless citizen she rescued isn’t so helpless. Turns out she’s police officer (captain?) training her squad to combat super powered baddies and Spider-Woman interrupted the session (No police activity updates from the Avengers once you quit, unfortunately). This issue flowed really well, allowing those great action sequences to lead into character moments with Jessica Drew just being goofy and snarky as Jessica Drew and not just as Spider-Woman. The aftermath of this first half does lead to what I’m guessing is the main conflict of the arc. Ben Urich (famous Daredevil/Spider-Man/New York centric character) approaches her about a case he’s working on. I won’t spoil too much of what happens here but the case does ask some interesting questions about just who superheroes think is worth saving.

What I liked best about this new arc is that it grounds Jessica both in terms of her super-heroing and her character itself. A good single issue, especially one that starts a new story arc, should tell a whole story within the twenty or so pages we get and then also leave a hook to get us to pick up the next one. With this one, we get to see a character story arc that grounds Jessica as a relatable protagonist through her mistakes, humiliation, and her ability to own up to both.

Javier Rodriguez and Alvaro Lopez on art and colours are a godsend for this series. In the wake of losing the incredibly quirky art in She-Hulk, Spider-Woman fills up the void in its own unique way. I love the way Rodriguez choreographs and paces the opening sequences, from the first few panels of her on her awesome motorcycle to her rushing in and saving the day. The distinctive character designs are remarkable as well. Fans of the new Batgirl creative team might find a familiar art style here because of 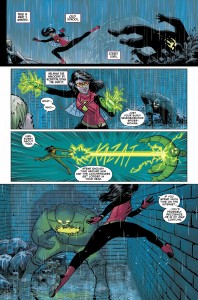 the way Rodriguez animates facial expressions and creates movement in and between panels. Another thing I loved about the art was all the sound effects. They have a life of their own, whether the onomatopoeic word is embedded into Spider-Woman’s venom/electric blasts or being cut off by the panel as she drives off in her motorcycle. Lopez does a phenomenal job on colours with this one, especially in one scene where the primary lighting comes from a window with blinds. I hope Spider-Woman stays for a long time, if only to give us more Rodriguez and Lopez art.

Verdict: This one is a definite BUY. Jessica Drew has always been one of my favourite Avengers and it’s great to see her get her own space outside of that world and Spider-Man’s world. Hopeless and Rodriguez are the perfect team for this book and I absolutely cannot wait to read more.