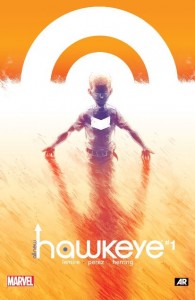 OMG. Give me a minute. I need to take a breath.

Okay, I was worried — so worried.

And not just great, but … really great.

Admit it. You were concerned, too! The previous Hawkeye book — by Matt Fraction, David Aja, et al. — was extravagantly beloved, and deserved every accolade. Fraction’s Hawkeye, featuring Hawkeye (Clint Barton) and Hawkeye (Kate Bishop) was, as often as not, the best book on the stands. So when it was announced they were ending the series and starting anew … well, I doubted.

But here we are. All happy.

Lemire and Pérez, co-billed as storytellers, have given us a comic that is both visually stunning, and  filled with amazing kinetic and character energy. The issue shifts between a “then” sequence set in Iowa, focusing on a young Clint and his older brother Barney, and a “now” sequence following current Clint and Kate on a mission for Maria Hill at a Hydra base in the Antarctic. Each shift is marked by a change in the art style, the “then” being rendered in water color and the “now” in bold lines and colors. The “then” sequence is evocative and impressionistic; the “now” sequence is non-stop action. The stories in both sequences build in parallel, at times playful and grim, carrying out the ballet of violence, and coming to a point at the end that promises great things: a horrific discovery for young and old.

As in the Fraction series the core of the book is Clint’s relationships with his mentor in the past and his protégé in the present. Part of me is still amazed that Hawkeye — one of Marvel’s great misanthropic and misogynistic assholes — could become this fully realized person defined by solid and admirable friendships. God help me, I love spending time with this guy! But it’s not going to be much time. If I’ve got one gripe, it’s that 18 pages is far too few (at least it was not one of the $4.99 books). I’m already preparing to grieve for the end of this five part series.

Verdict: The book draws you right in. Here at Talking Comics we’ve developed a theory around first issues: great first issues should be great without the reader needing any prior knowledge. By that measure, and so many others, All-New Hawkeye is a great first issue and … maybe … the best thing on the stands?