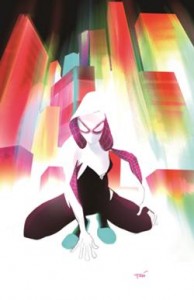 From the moment she was introduced in Edge of the Spider-Verse, Spider-Gwen remade the name Gwen Stacy, transforming the character from famous fridged love interest to kickass super-heroine. It’s a change we didn’t know we wanted or needed but once we got it, it all clicked into place. With Edge of Spider-Verse #2 going into its fifth printing, it’s not a surprise that Spider-Gwen got her own series and to have it with the Edge of Spider-Verse team is pretty amazing. So going from love triangle to victim to alternate reality Spider-Woman, how does Latour and Rodriguez’ continuing adventures pan out?

Much like Silk #1, this series begins post Spider-Verse. For all of you who skipped the big event (or are waiting for it to be collected in trade), you don’t need to know much other than the fact that she left to fight demon spider-hunters and now she’s back. Unfortunately, Spider-Gwen isn’t getting a hero’s welcome. Since the end of the Edge of Spider-Verse one-shot, Captain Stacy has been in on his daughter’s secret. It’s clear that he’d do anything to help her now but given that the public opinion still names Spider-Woman as New York’s Most Wanted for the death of Peter Parker, his testimony doesn’t do much. He’s been reassigned and his replacement is yet another example of how much this alternate reality can surprise you. Kingpin’s power is hanging over the larger narrative but in this issue, Gwen Stacy has to face another familiar Spidey-Villain: the Vulture. There are other fun cameos throughout the issue that certainly make this exploration into this side of the alternate universe interesting. And while I thoroughly enjoyed the issue and all the possibilities it presents, it didn’t hook me in completely.

Meta commentary tends to turn me off more than it does entertain me but I did enjoy it here to a point. Here we have a Spider-Man villain whose ego is so threatened by Spider-Woman’s infamy that he attacks people because of it. He’s a bitter white guy who sees Spider-Woman’s name on the billboard and gets it in his head that he’s better and badder than she could ever be. While I did enjoy this conflict, mostly due to Spider-Gwen’s hilarious quips and attempts at baiting him, there was something a little weak to the plot that took me out of reading it. On one hand, it kind of felt like it was still Peter Parker but in Gwen Stacy’s body. She’s facing much of the same issues that Spider-Man faces: the city hates her, Jameson has it out for her, and she just can’t seem to win even when she wins… It all kind of sounds too familiar to me. Gwen barely interacts with the Mary Jane’s here and that was one of the main aspects of her story really made her different from being just a genderbent Peter Parker. I do think that this will grow and develop into its own but I would have liked to see Gwen be a little less like Pete and a great way to do that would’ve been to incorporate more intimate Gwen Stacy moments with the other people in her life. It wouldn’t be fair to compare it to Silk #1 but I felt that Silk’s introductory issue had a more cohesive narrative told within that one issue while at the same time embedding foundations for a larger narrative arc. It also did well to distinguish her character from Spider-Man. Here, we have several conflicts going on with almost none of them being solved by the end of it.

There are degrees of cliffhanger moments that I think work in different ways depending on the issue in the arc. I thought the cliffhanger we’re left with was a little unsatisfactory given how little actually gets resolved. Still, the visuals we were given parallels a really big moment in such an incredible way that it makes the continuation a must read. (Vague enough for you?) I’m leaving my dissatisfying feelings to pacing issues, which I thought the Edge of Spider-Verse one-shot suffered from as well but given that it was a one-shot, I understood how it could happen. Here however, I have a feeling that it’ll read better in trade but that’s just me.

By far, what blew me away was the art by Robbi Rodriguez and colours by Rico Renzi. I’ve seen a lot of people compare this book to Batman Beyond and I didn’t really grasp the comparison until I saw the character redesigns. Vulture looks downright scary and for the first time, I really believed him to be a villain you could take seriously in a fight. I also really appreciate how much personality Rodriguez can give each character no matter how small the panel time they get.

Whatever didn’t work for me in the pacing of the plot wasn’t as much of a problem in the actual visual pacing in the panels. Rodriguez brings a very fast-paced and dynamic style to this comic that certainly suits the demands of a Spider-Man related comic while also making it unique in comparison to the other Spider-Man comics out there. There are times when you can get lost with what’s happening in the quieter scenes with Gwen in her civilian clothes but on the whole, I actually enjoyed the visuals a lot more than the actual story.

Verdict: I’m torn on this mostly because based on aesthetics alone, I loved it and the series itself means a lot to fans everywhere. I suppose my expectations for this book were too high and while I did enjoy reading it, the book failed to reach the expectations I set. Still it’s worth checking it out. I think it’ll get as much mixed reviews as Batgirl #35 did. Like Batgirl, there’s potential for the larger story arc and I hope the payoff is just as satisfying.