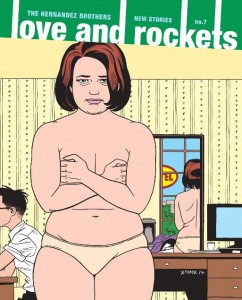 The annual publication of the Love and Rockets: New Stories anthology should be an international day of celebration. The series, which has been published by Fantagraphics Books since 1982, was the gateway drug of alternative comics for a whole generation. Tales focusing on latino cultures with mostly female casts, and stories filled with magic realism? New ground for this comic fan.

I remember reading Mechanics — the first of many of Love & Rockets tours des force — as it came out in the early ’80s and feeling as if the top of my head had been taken off. It’s not news to anyone that graphic storytelling can do anything novels, poems, or any other type of “legit” writing or art can do — but I learned it from the Hernandez brothers. Mechanics was a genuine masterpiece (as was Heartbreak Soup) which stands up today. (If you want to check these out, Fantagraphics has republished much of the original Love & Rockets series in a set of trade paperbacks.)

But what about the current stories … like the ones in the book I’m here to review?

New Stories #7 opens with Gilberto’s “Killer in Palomar.” Killer is the grand daughter of Luba, the focus of Gilberto’s classic stories set in the Central American town of Palomar. As with Luba — and really all of the characters at the center of Hernandez stories — Killer is a strong protagonist with a story that allows her be a strong protagonist. Over the course of the story she looses and than regains the small hammer that was always a symbol of Luba’s puissance. Perhaps a foreshadowing of things to come? Killer stepping into that role? Becoming the Luba of modern Palomar, with its iPhones and such?

Jaime’s contribution to the mix is a stunning piece telling the story of Maggie and Hopey taking a road trip back to their old stomping grounds to attend a reunion of their classic crew — Izzy, Terry, et many al. They show up a day early to take in the town before hitting the reunion and spend a night together in a motel. Both are older. Both have lives. And you may or may not be able to go home again.

Both tales are great — as are the odds and ends that are mixed in throughout — but while the Gilberto story sets up a wonder of things to come, the Jaime story is a genuinely masterful short story in its own right. You get through the tale feeling as you’ve had an experience, not just that you’ve read about one. The theme of all of the Hernandez brothers’ work is that life, lived day to day, is simultaneously joyous and heartbreaking. So satisfying.

Verdict: Buy it. And then buy everything else they’ve done. This is graphic storytelling at its highest level.