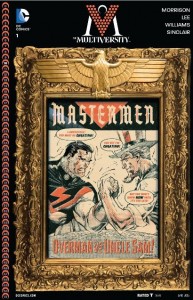 I’m beginning to notice a trend in the Multiversity series. Grant Morrison takes an idea that seems to have been done before, and then does it so well you almost forget what went before. Shazam revival? Been done before … but Thunderworld was better than we all thought possible. Imagine if Superman had been brought up in a totalitarian environment? You don’t have to because Red Son did a great job imagining it for you. But in Masterman #1, Kal El lands in Hitler’s neighborhood in the early thirties. Übermensch (Overman) ensues, and the world is now Hitler’s plaything. Morrison knocks it out of the park … again.

The story takes place after the war has ended, after Hitler has died, in Nazi controlled America, specifically Metropolis. Is Overman the new führer? It’s not clear. The Reich is upheld by Earth 10’s version of the Justice League, called the Reichsmen, with versions of Our Heroes all festooned in swastikas. Opposing them are a version of the heroes we know as the Freedom Fighters, with one important difference. Aside from Uncle Sam, the Freedom Fighters — Phantom Girl, Black Condor, the Ray, Doll Man, Doll Girl, and the Human Bomb — have been recruited from the very populations that Hitler has attempted to eradicate. Thus we have, perhaps, the first ever Jehovah’s Witness superheroes in Doll Man and Doll Girl (“We won’t fight in your war, Sam. Jehovah prohibits that. But we’re willing to help anyone who’s in trouble.”) As well as “Jews … Romani, Negroes … the usual suspects.”

Without trying to capture Morrison’s lightning in the bottle of this review, I’ll just reiterate how he takes this idea that was hackneyed when Gardiner Fox did it (“What if the Justice League were bad guys!”) and makes something wonderful. The art work is some of Jim Lee’s — yeah, I’ll say it — best I’ve ever seen. A whole stable of inkers and colorists somehow come together to execute a coherent vision. Of course it’s dark. It’s Nazi America! But it’s good. The story is good and Uncle Sam is damn inspiring.

Verdict: Buy it! Buy it because Overman, of course, has second thoughts about his place in the Reich, but Leatherwing (ersatz Batman) has none! Buy it because it’s the best writing the villainous Sivana has ever seen. Buy it because the Human Bomb is a character who doesn’t work even according the comic physics, but they make him great, anyway.