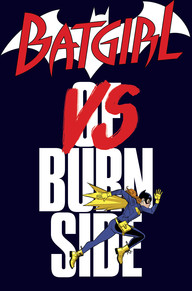 It’s the penultimate issue of the first arc with Batgirl’s new creative team and everything that has been built up in its previous issues is beginning to pay off in the best of ways. The new direction Batgirl has taken has gotten a lot of attention both in the comic itself and out in the real world. This run has faced plenty of criticisms for being too OOC (out of character) in regards to Babs’ actions and general attitudes and although I do understand and respect a lot of the concerns, I’ve mostly enjoyed where the creative team took this new direction. Still, it hasn’t been a smooth transition and even I had some doubts concerning the narrative payoff of some of the central character conflicts. Issue 39 however, assuaged a lot of my central concerns and I am so excited to see the conclusion and where it will lead the character post-Convergence.

In Simone’s run, Batgirl went up against the worst of Gotham’s line of villains from the Joker to her murderous sociopathic brother James. Now she’s facing an entire hipster city borough. As the cover points out, it’s Batgirl vs. Burnside. Hooq, the evil social media app/dating site set a 20 million dollar bounty on her head but that’s not even the worst of Batgirl’s problems. You could scoff at the total change up in tone and character but the slight ridiculousness of this first conflict certainly balances out the heaviness of Babs’ other personal fights. Barbara’s ongoing fight with Dinah is just one of them and by this issue it was starting to get on my nerves. As much as I understood why both parties are mad, even I had a hard time believing Dinah would act the way she did. However, it’s nice to see it get hashed out in this issue and made it all the more satisfying to see them settle it with a Staff Meeting.

There’s a lot going on in this issue and it’s a testament to Fletcher and Stewart’s ability to pace so much in just twenty or so pages. From the small battles with Burnside’s residents, her dire school troubles, her ongoing clash with Black Canary/Dinah, and her questionable sanity, it’s amazing that everything was paced so well and that didn’t read as too overwhelming. A lot of that is reliant on the creative team’s ability to cohesively tell the story from a visual standpoint. 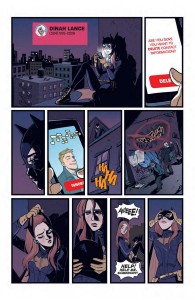 I don’t mean to point out the obvious but the panel beats and the art contained in said panels are so incredibly important to the pacing of any comic book, especially those reliant on the monthly single-issue system. However great the writing is, it would be nothing without the right artist or art team to show the story in the constrained space of twenty pages an issue. That being said, it’s really amazing to see Babs Tarr grow as a sequential artist, each issue gets better and better. I don’t know how much of it still comes from Cameron Stewart’s breakdowns but the emotional beats are definitely some of the best I’ve seen yet. The details to the outfits are definitely Tarr’s signature but now the close-ups on Barbara’s face are great too. She looks like a stressed out, tired grad student and that helps with the relatable aspects to this interpretation of the character. Credit is also due to the colourist Maris Wicks, whose colours are spectacular this issue. The story-telling beats and scene changes involve a lot of day/night contrasts and they look amazing with Wicks’ colour palettes. Wicks uses light and especially shadows really well and it makes all the difference here.

Verdict: If you’re already invested in this new arc, this is a DEFINITE buy. If you picked up the first issue and you weren’t sold, I’d encourage you to take a look at this issue and give it another chance. Despite the brighter outlook, Barbara is still undergoing some pretty heavy experiences that are incredibly relatable to everyone in their 20s or going through grad school. Both the writing and art are best its ever been since the start of this arc. Retrospectively, you can see the foundations built in the first couple of issues begin to build towards something a lot more cohesive narratively. Knowing how much was laid down then, we can see vague but exciting hints on where Batgirl (and another Birds of Prey solo series) might go.