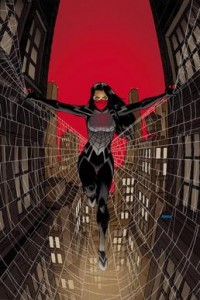 Fresh off the heels of the Spider-Verse event, Silk is now fighting crime in her very own series and it’s certainly the best and most fleshed out interpretation of this new character that we’ve seen so far. As much as I loved Spider-Verse, Silk’s role was more of as a plot device than an actual character. It was really hard to get attached to her given the fact that her introduction didn’t leave much room for character development before she was thrown into the Spider-Man centric event. Still, this is an Asian-American superheroine with her own superhero name that didn’t start with “Spider-.” I really, really wanted this book to be good but given how poorly Spider-Woman started, I was equally as cautious as I was excited for this solo series. I must say though, I was pleasantly surprised by how much I loved this first issue.

We start off with Silk in action, fighting a Vulture knock-off with a questionable name. She’s armed with her snazzy hand-woven outfit, some quips, and malfunctioning powers… Suffice to say, it doesn’t go well. What I appreciate the most about this round of new heroes is their spectacular failures. They are given the chance to mess up. Honestly, I could be mad about the fact that Spidey comes in to save the day right from the start but in the context of the wider narrative, it goes along with Silk’s ongoing inner conflict. Cindy has bigger things to worry about, she’s been missing for ten years and her family is nowhere to be found. Going right into crime-fighting might not be the wisest choice when her personal life is in such a state. Spidey might have rescued her this time but she very much has her own life to live outside of Peter Parker-Verse.

The flashback sequences are what really establish Cindy as her own fleshed out character in her own series. Perhaps part of it comes from my own estranged experiences with Asian-North American family dynamics but it definitely made Cindy feel a lot more real and relatable to me. This could have easily been a Spider-Man knock-off, straight down to the pathetic Peter Parker moments but Cindy is clearly her own person with her own motivations and ways of dealing with the craziness around her. As much as I do enjoy her and Peter together, I do look forward to her swinging solo for a little bit. There are multiple threats revealed toward the end of the issue and the first of them is particularly excited for another chance to take Cindy down. She will mess up on her own terms and her victories will belong to her alone and with such a promising start, I’m really excited to see her journey play out.

While I really enjoyed the issue, my one nitpick was that I didn’t particularly like the Pokémon reference that Silk made in the first couple of pages. Because Cindy is the same age as Peter, it kind of took me out of the book when she asked if Pokemon was still a thing and that she was maybe hoping that it still was a thing. Maybe it’s just me but I don’t really like when superheroes as old as Spidey are dated with pop culture references. It just throws me off. Like I said though, it’s a small nitpick of mine.

Stacey Lee and Ian Herring are on art and colours respectively and they make a pretty great team. It’s fitting that this issue comes out the same week as Batgirl because in terms of visual style, they are really similar. I’ve been really enjoying the distinctive animated look of titles like Batgirl, Gotham Academy, Squirrel Girl, Ms. Marvel, etc. and I’m glad that Silk is following that direction rather than regressing like Spider-Woman’s first couple of issues did. All these titles are different from each other in terms of art and content but similar in their unique approaches to designing their version of the superhero comic book world. Lee’s art has a clear manga influence with heavy lines and dynamic action shots. The colours are equally dynamic and bright with the present day sequences but are grey-scaled when it comes to the flashbacks. Put all together, this makes for beautifully engaging visuals. I appreciate all the little visual details outside of the ethnic physical characteristics that make Cindy (and her family) read as authentically Asian-American. Still, given the staggering amount of artists in the superhero realm of comics that can’t actually draw Asian characters (especially Asian women), it’s nice to see these physical characteristics done properly and without the over-sexualized nature that usually accompanies them.

Verdict: Buy. If you’ve been a fan of books like Batgirl and Ms. Marvel, this is a solid addition to the pull list. This is a great introductory issue because, as Steph would say, it doesn’t suffer from first-issue-itis. While it does follow the events of Spider-Verse, you don’t actually need to be caught up with the event at all. This issue is pretty balanced with enough action, character development, and essential plot foundations laid down to pull you back for more.

If you know me at all, you’d know that I’m all for diversity. This is a great example of diversity in comics done right. I’ve been pointing out that she’s Asian American a lot in this review but it’s not directly addressed in the comic itself, it just is (obviously). It’s in the interior decorations in her parents’ house during the flashback scenes. It’s in the interactions between her and her mother. She’s more than a diversity gimmick to check off on a list. She’s not a ninja or a kung-fu master. She’s not a sex object. Based on this promising start, we can see that she’s a fully realized character and we’re only just getting to know her.