Spider-Woman #4 is a transitional issue. Issues 1-3 were knee-deep in Spider-Verse shenanigans. Issue #5 will be relaunch or sorts (Jessica Drew a.k.a. Spider-Woman gets a new costume and a new artist, Javier Rodriguez). Issue 4, the comic being reviewed here, is a post-Spider-Verse epilogue. Loom World and the chaos of Spider-Verse is left behind and Jessica Drew makes a life changing decision. 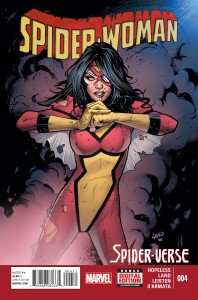 Three days later, Spider-Woman and Carol Danvers a.k.a. Captain Marvel, both in costume and wearing trench coasts, chat about donuts as they approach Avengers Tower in New York City. Jessica came to Avengers Tower to “do a thing”, a thing that her best friend, Captain Marvel, hasn’t been let in on. But Jessica needs Carol there for moral support. As Jessica’s nervousness continues, the two enter Avengers Tower, passing a debating Beast and Vision. Soon, they’re meet by an elderly Steve Rogers, formerly known as Captain America. Jessica has an interesting relationship with Cap, one that causes Jessica to feel the need to always apologize — as though she feels she is always letting him down, that she’s not good enough.

Before Jessica can get to the heart of the matter, the subject of Vision and Beast’s debating comes crashing through the wall, razor sharp teeth and claws attacking. As Steve Rogers and Jessica blast at the thing with crazy Avengers guns they banter back and forth. Eventually, the pressure of the battle sets Jessica off and she erupts in frustration, defeating the giant space flea. The post-battle calmness allows Jessica to let her guard down and spill the beans. She quits the Avengers.

I want to be a normal person, part of the time at least. I want to help people again. Regular people. Maybe live in an apartment that isn’t made out of recycled Iron Man suits. Go on a date with somebody who hasn’t seen me punch an alien. I’m sorry.

Like a wise and understanding grandfather, Steve Rogers tells her with a warm smile, it’s OK. She can quit.

The end of Spider-Woman #4 shows Carol and Jessica walking through the streets of New York. Carol asks her best friend what’s next, where is she going to live, where is she going to find regular people to help. Jessica has no answers for her, except that it’s time for a new costume. After some light-hearted ribbing about her current costume Jessica says she needs better friend. Carol replies that there’s no such thing.

Check it out. Spider-Woman #4 is a nice comic — not great, but not bad at all. In 20 pages, Dennis Hopeless is able to get Jessica out of the events of Spider-Verse and her membership with the Avengers, leading her onto a new path and “a bold new direction.” Similar to the recent “reboot” of DC Comics’ Batgirl, Marvel is giving Spider-Women room to grow and time to find herself. Her new adventures, starting with #5 next month, will show Jessica Drew in a new light, hopefully successfully appealing to a relatively new demographic of comic fans looking for superhero stories more personal and characters more personable.