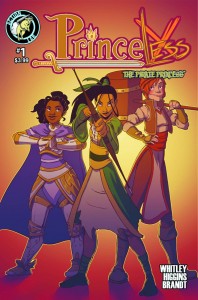 The third volume of Princeless is out in stores this week and it’s a great place to jump on the series if you missed the last two volumes. This series features many young female characters but what’s most important is that these are young female characters of colour. These are young women who support and help each other in a plot that doesn’t revolve around romance. Princess Adrienne is tired of waiting for a prince to save her from the tower her parents put her in, so saves herself with her trusty dragon Sparky. Now she’s on her own mission: save her sisters from the same fate and help the princesses and other young women she finds on the way to save themselves. This time around it looks like Adrienne’s helping a princess of a different kind. Will Raven Xingtao, aka the Black Arrow, prove to be an ally or an enemy?

This new arc opens with a flashback. We get a glimpse into the pirate princess Raven Xingtao’s childhood. Her father is telling her a bedtime story about his mother, the legendary pirate Ming Two-Tails. Unlike Princess Adrienne, whose father put her in the tower back in the first volume, Raven’s father appears totally supportive of Raven’s dream to be a fearsome warrior pirate. Fast forward to the present and she’s locked up in her own tower, betrayed by other family members. Suffice to say, she isn’t happy. Luckily, Princess Adrienne, Bedelia, and Sparky find Raven and decide to help her out. Chaos ensues. I love how it started with this scene as it does contrast with Adrienne’s own family dynamic really well. Also, I’m a sucker for sappy father/daughter moments. 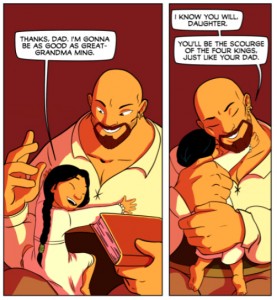 Whitely’s writing is charmingly delightful here. The world he has created is rich with strong and strongly written female characters from all different walks of life and a variety of different motives and motivations. In previous volumes, he hilariously addresses many sexist views in the fantasy and comic book genres and he continues to do so here. From Raven to Adrienne to the hammer-wielding dwarf Bedelia, there is no shortage of role models for young readers.

Rosy Higgins and Ted Brandt are an excellent team on the visual side of things in this issue. The characters and creatures have a familiar all-ages/Disney-esque design, helping to make the issue look as accessible as the story is. The colours pop and give an animated feel to the issue. What impressed me the most were the action sequences in which the panelling and pacing were incredibly entertaining and easy to follow. Raven is a proficient martial artist and archer and seeing her dispatch enemies with flare is extremely satisfying.

Verdict: Buy. This is one of most important comic book titles out there for young girls. This book isn’t just portraying young women in a positive light; it portrays young, diverse women with agency in a positive light. Coming off the heels of our site’s Representation Week, this series is one of the best examples of exactly what we need in the comic book world. This book is far from Kelly Sue’s newest series Bitch Planet in plot and content but at the heart it has a similar message, only for a much younger audience. Princeless encourages young girls to be themselves and to help themselves, rather than wait for someone else to save them. It encourages female friendships and camaraderie over the traditional fairy tale romance plot. This book openly addresses a lot of sexist notions that, while they seem ridiculous to some, are very much still prevalent thoughts today. I can’t stress enough just how important this book is to comics so give it a try and see for yourself!

This new arc is already three issues in on Comixology so if you’re a digital reader, you don’t have to wait. For you readers who read print issues, the next one comes out in a couple of weeks.