What we decided to do with Imperium #1 was to give you a look at the title from the perspective of a new reader and someone that has been reading Valiant since the start of the relaunch.

In this review, I am cast in the role of the Valiant neophyte. Adam is the grizzled veteran. I have very little experience with Valiant books, but just this month, reading some X-O Manowar trades, something seems to have kicked in. So when the question was asked — “Who wants to review Imperium #1″ — I raised my hand. I’m very happy I did so. 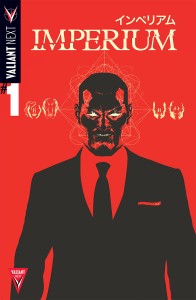 The front matter tells us that this book is focused on Toyo Harada and his army of “psiots.” The press material tells us that this is a continuation of Valiant’s Harbinger. Does any of that matter? Can you enjoy the book if you haven’t got the deep back story? Those are two different questions. Adam will tell you why it does indeed matter. I will tell you that, yes, you can enjoy this book coming into it cold — and you should.

This is an excellent first issue. It opens some dozens of years in the future after Harada’s psiot movement has achieved startling success in establishing a utopian society. It follows one of Harada’s close acolytes, discussing history, while moving towards a new frontier. I can’t describe it much further than that without going into crazy spoiler territory. The issue as a whole uses some very sophisticated storytelling to establish tone, events, and characters — and leaves us dying to know what happens next. Joshua Dysart has crafted a comic that is not only an excellent first issue, but also an excellent first chapter to a story that I very much will be following.

And about the other stuff — the connections to the rest of the Valiant universe? Those sorts of things add depth to the story, even if you don’t get the references. I caught one, I was proud. A reference to “Vine technology.” It happens that in X-O Manowar I read about the Vine and, yeah, I was like Captain America getting that reference to The Wizard of Oz. But even when I was not getting references, it was obvious the story was set on a long-built, well thought out foundation. It felt strong.

And it did make me curious. I do like “getting” the references, and pursuing the fascinating and obscure. Valiant gives that to us.

Gary did a pretty good job of introducing the book, so I’m just going to jump right in. Valiant has been playing around with Harada as a “villain” for a while. Whether or not he is actually evil or has malign ambitions is a subject of debate among many fans. What is clear is that he was the antagonist in Harbinger. Harada has always stated that what he does, he does for the benefit of mankind. His methods have been called into question, and those methods continue to be questionable in Imperium #1.

Harada is playing center stage in this series, but whether or not he takes the role of the protagonist is yet to be seen. The young, incredibly gifted Darpan was the focus for the majority of the issue. Darpan gave us an interesting point of view for the story. Were the characters actually seeing Harada’s vision for a better world or only what Harada wanted them to see? I don’t want to go too much further down this path, because as Gary points out, we will head into spoiler territory.

Joshua Dysart has established Harada as a force to be reckoned with in the the Valiant world. We know Harada has no qualms feeding dreams and ideal worlds into the minds of others, as we saw what he did when he captured the Renegades back in Harbinger. I am incredibly curious if he was doing that here, because we have seen him show a level of compassion towards Darpan that he does not extend to many others. In the past I thought his actions and feelings towards Darpan were genuine. Maybe the feelings were, or maybe it is all part of the plan. As the old saying goes, the road to hell is paved with good intentions. We shall see.

We can not end the review without talking about Doug Braithwaite’s art. It is absolutely breathtaking. The realism pulls the reader into the future utopian world of Harada’s vision. If you read Armor Hunters you’ll know that Braithwaite brings an amazing level of detail to his work. The emotion and expressions were presented in all of the characters’ faces. However, Harada wass still a mystery. You could see the hard determination and commitment in his face, but his true intentions remained hidden. Kudos to Braithwaite for mirroring in the art the intricacies and emotions of the story.

Gary’s Verdict: Buy it, yeah. Buy it. It’s a great first chapter of a science fiction/superhuman story operating at the level of the great John W. Campbell writers. I am completely sold.

Adam’s Verdict: A solid BUY for any readers of Harbinger. Issue #1 of Imperium has me pumped up for what is to come. The level of mind games that may or not being played here is at a much deeper level for the “veteran” readers. It does not make the story unreadable for new readers, but there is some stuff they will miss. In my mind, Dysart can do no wrong right now. Let’s hope this trend continues.

Check us out next week on the Talking Valiant podcast. We will discuss Imperium #1 in greater, spoilerific detail.