Written and lettered by Ed Brisson 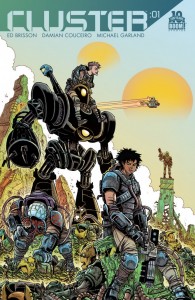 Space adventure is as far from a new genre to the comics medium as it can get but with the rise of independent, creator-owned titles, it feels like the genre has been revitalized in a way. Boom! Studios’ Cluster #1 is one of many in a wave of recently released comics that is set in the vast unknowns of space and has been mixed with a plethora of other familiar genres to create something that actually feels new. Ed Brisson and Damien Couceiro’s Cluster is set on the planetary outpost Midlothian, a barren place prepped for mass human occupation within the next decade. Unfortunately, they’re having a couple of setbacks and have resorted to obtaining voluntary soldiers in order to help expedite the process. Their source of volunteers: criminals just sentenced to life in prison. They’re given a choice of volunteering off-world for 15 years or continuing their life sentence.

Our central protagonist is Samara Simmons, the daughter of a very wealthy and influential man whose reasons for being on Midlothian are barely explored this issue. The first few pages reveal the inciting incident for her arrest and leave just enough to understand where her head is at in the present while also leaving a lot of room for mystery. Refusing her father’s help made the choice simple for her and now she’s serving 15 years as a soldier/prisoner on a faraway planet instead of that life sentence. The grand aspects of the plot aside, the focus on Samara is pretty interesting. We may not know a lot about her character so far but her status makes her the focus, or rather a target, at the prison. She’s primarily reactionary in this issue. Despite wanting to be left alone, nobody seems to be respecting that wish. Between the warden and another prisoner, she’s pretty much fed up with people but seeing as it’s a prison story, we understand that it can’t last too long. Still, it’s fun to see her tell people to please shut the *insert choice profanity here* up throughout the comic. (No actual swear words in the issue if that’s an issue for people but there are some clever insults hurled in a scene that made me giggle a little.)

The prison system itself is not just comprised of one gender. Having male, female, and alien criminals with life sentences all housed in one place could be a bomb just waiting to explode and I’m looking forward to see if it will play out that way in future issues. At the same time, I’d love to see it be a non-issue and rather have the focus being on survival. Honestly from the first issue alone, I can’t really tell where this is going to go and that makes it particularly exciting for me.

I’m not too familiar with Damian Couceiro’s work but so far I’m really impressed. Despite being a space story, there’s no “shininess” to the art. It’s very rough which works in detailing the dire tone of the story. What got me into the issue was the first scene in which Samara is gaining consciousness after being knocked out and the panelling follows her point of view. It confused me the hell out of me at first and I love that about it. I also really appreciate the fact that the artist isn’t afraid to draw wrinkles and hard lines around most of the characters’ faces. These people have been through hell and it’s good to see visually, especially with the female characters. Side note, Samara’s scars are pretty badass so props to the creative team for that character design.

Verdict: Buy. From the concept to the dialogue to the art to the characters, I was fully invested in the world Brisson and Couceiro created within the first couple of pages. It’s a little bit of Bitch Planet and Copperhead mixed with a dash of Rat Queens (more specifically the Braga part of it).

My favourite thing about science fiction/space comics is the sheer potential. You could take used tropes like the prison trope or the rich, bad girl daughter character trope, mix it with space, and the possibilities for engaging stories are nearly endless. In the hands of a talented creative team, these mixed space/science fiction genres can be truly spectacular. We’ve seen this with Saga, Copperhead, Black Science, Bitch Planet etc. now we can add Cluster to the list. Based on the first issue, I have no clue where it’s going to lead but wherever it goes, it looks like it’ll be an exciting ride.