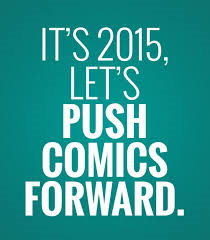 An Introduction from Bobby Shortle Editor in Chief of Talking Comics

I’m a white man and life is easier for me. Do I have concerns and issues? Of course. Do I think life is a gold paved road where I’m gifted everything because of my gender and the color of my skin? Of course not. But, I do know that my chances of success and my overall quality of life is improved because I just happened to be born this way. I don’t get racially profiled, I don’t have constant fears about my safety and I certainly don’t fear speaking out about any injustice I see anywhere. These are all privileges I enjoy not because I’ve earned them, but because they were given to me.

As a white man I’m not forced to self identify with stereotypes. When a horror like Sandy Hook happens no one calls for the caucasians around the globe to answer for the crimes of one person. Yet, when a few extremists tragically attacked Charlie Hebdo the world called for Muslims worlds away to answer for their crimes. This is a broken way of thinking and we need to fix it. It may seem too big.  Yet, we all have the ability to change the community we all in habit. Comics are a niche and as much as we see that as a detrement sometimes, it’s also our greatest strength. We are a tight knit and relatively small group of fans, creators, retailers and journalists with opportunity to effect real change. We can be an example to the rest of geek culture, the internet, and the world that it’s possible to be truly united under one idea. It’s not a complicated idea and it isn’t even an original one. When I was growing up they called it the Golden Rule.  “In everything, treat others as you would want them to treat you” Every culture and every religion has some form of it and it’s time we start living by it.

I believe in putting your money where your mouth is and so when Maria came to me with the idea of co-hosting the London School of Economics and Political Science’s  Comics, Human Rights and Representation week I said yes without a second thought. Over the next 5 days you will be seeing some amazing content. In fact as I read through the various articles I was stumped on how to write this introduction. Why am I the vanguard for these amazing people, all of them far more intelligent and qualified than me? I’m absolutely humbled that an institution like the LSE and a group of minds like the ones on display here have allowed their work to be associated with a tiny website I started out of my apartment. But, more than humbled I am inspired to fight harder to be better and to help make this industry we love so much one we can be proud of.

I have prattled on long enough. Without further ado, here is Maria Werdine Norris the organizer of this event.

The practice and promotion of human rights is at its core about challenging invisibility. Too often, human rights activism is portrayed as a lofty ideal, comprising years of study and international activism. But in reality, human rights activism begins with respect for human dignity and the commitment to pull from the shadows those who are forgotten and oppressed.

We live in a world where countless people are invisible; where their lives and stories are not represented in the media or popular culture. Comic books are an aspect of popular culture where invisibility has historically been reinforced. Most comic book characters are male, white, straight and able-bodied. This is especially so in the superhero genre, which leads us to the following questions:

Why do super-powered genetic mutations select white people almost exclusively? Why, if super-soldier serum and weaponized armor allows for heroics regardless of natural strength, are there no super-strong women?

And as The A.V. Club’s Oliver Sava puts it, the answer is because straight white men dominate comic books, both in and behind the pages. Just like in the real world, straight white men are still the ‘default‘. And yet, recent changes in the comics industry have also made it an arena where invisibility is being challenged at unprecedented levels. Just last week, Ross Richie, the founder and CEO of comic books publisher BOOM! sparked a social media wave with his call to push comics forward:

Have you ever had a friend that shared a lot of your interests, but they didn’t read comics? … They liked the idea of comics, but there wasn’t a comic book that felt like it was made for them… Let’s go make that comic book for them. Together. As fans, as creators, as retailers, as the press, as publishers. All of us. Let’s talk about how we can all Push #ComicsForward. Because comic books should be for everyone.

So starting today, we will do our bit to challenge invisibility, push comics forward and promote human rights. And we won’t be doing it alone. The LSE Human Rights Blog is very proud to be partnering with Talking Comics for this project. Talking Comics is a website that has been dedicated not just to comic books, but to fostering a community of fans. Through their podcasts (including The Missfits, a podcast run entirely by women), they have created a safe and progressive face for comic book fans who are deeply invested in the future of the medium and pushing it forward. All articles will be reposted on Talking Comics. Our hope is that by combining forces, we can reach both the human rights and the comics audience.

We will be publishing two articles a day until Sunday 8 February, including interviews with leading comic book creators such as Kelly Sue Deconnick and G. Willow Wilson. The writers that have contributed to this project are academics, journalists and bloggers, and they cover a variety of comic book titles. Organically, the articles have organised themselves around the theme of women in comics. This reflects a growing concern regarding female representation in comics, illustrative of the sexism which still permeates society as a whole. The tone of the articles is one of quiet optimism whilst still being aware of current problems within the industry.

It is our hope that this week will create new comic book readers. To make this easier, every piece will provide links to the digital version of the comics being discussed. When it comes to representation and popular culture, it is more important than ever that we vote with our wallets as well as our hearts. Finally, we encourage you to share your thoughts on the articles and welcome your engagement on twitter and facebook (#LSEComics).

Please join us for the ride.