Ever since Dynamite Entertainment started publishing Flash Gordon comics, I’ve been tempted to give them a try. With King: Flash Gordon #1, I made the decision to jump in and test the waters. 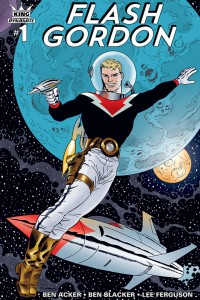 Reading a comic taking place in a universe you’re not familiar is tough for a lot of people, myself included. We all grow to love what we know and it’s difficult to step outside our comfort zones, especially when opening our minds up to characters and stories that have a lot of history.

Flash Gordon debuted in 1934 as a science fiction/adventure newspaper comic strip, apparently (no official source) created to compete with fellow space adventurer, Buck Rogers. A year later, Flash Gordon was adapted into a radio serial. Along with comic strips and radio shows, Flash Gordon has been turned into movie serials, films, TV shows, novels, and of course, comic books.

Starting in 2011, Dynamite Entertainment began to publish Flash Gordon in comic book form. In 2015, Dynamite Entertainment is celebrating King Features Syndicate’s 100th anniversary by launching new mini-series based on the printer’s most famous characters: Flash Gordon, Prince Valiant, the Phantom, Mandrake the Magician, and Jungle Jim — all culminating in a crossover event in May 2015!

King: Flash Gordon #1 contains 20 pages of art and story. The writing duo of Ben Acker and Ben Blacker (creators  and writers of the Thrilling Adventure Hour stage show/podcast and comics) handle the story and dialogue while artist Lee Ferguson (Dungeons & Dragons: Forgotten Realms, Kato, G.I. Joe: Snake Eyes) illustrates the action and adventure. Omi Remalante’s colors keep the mood of comic fun and light. Props to letter Simon Bowland for handling Acker and Blacker’s back-and-forth character dialogue effectively within each panel. Together, each of the artists and craftsmen on King: Flash Gordon #1 help to create a fun space-adventure comic with a modern and contemporary wit about it.

While I’m aware of the general history and themes of Flash Gordon and his universe, I’m not that steeped in its stories and characters. Jumping into this issue, I learned that Flash Gordon is a young, light-hearted, fearless man who hungers for adventure with his human friends Dale and Zarkov. Ming is still the villain and Mongo is still the planet of the action. Acker and Backer’s main tool for telling this story is dialogue. Character interaction and development is executed with witty dialogue and humorus exchanges between characters. There is a back-and-forth “jokiness” that might not appeal to all readers, but for those looking for a classic character writing in a modern style, it works. Acker and Blacker help bring century-old characters into 2015 in a way that should appeal to today’s diverse comic book audiences.

Check it out! King: Flash Gordon #1 is a fun space adventure with interesting characters, each with a unique voice and personality. The writing, art, colors, and letters are in harmony and create a single, coherent package for both old and new fans of Flash Gordon and friends. So if been thinking about giving Dynamite’s line of King Features Syndicate comic books a try, jump on in with King: Flash Gordon #1, the water’s warm and inviting 🙂