“What is a Munchkin?” & “Humans Got No Class”
Written by Tom Siddell, Illustrated by Mike Holmes, Colors by Fred Stresing, Letters by Jim Campbell

“Ready for Anything”
Written by Jim Zub, Illustrated by Rian Sygh, Letters by Jim Campbell

Part of my new year’s resolution is branch out and try more comics that are not from the Big 2. When I saw that a new series was coming out by Boom called Munchkin I decided to pick it up and give it a try. Looking at the cover I got a feeling that this might be an all-ages type of comic. There was also something really familiar about the art and the title. 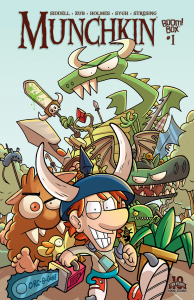 Once I opened up the issue I realized that Munchkin is based off of the popular card game of the same name. I know of the game, but I have never played it. This got me a little worried at first, but I decided to not think too much about it and to keep reading. A good decision, and as fate would have it the first story “What is a Munchkin?” would help to set the stage for those of us not familiar with the game.

The issue as a whole is full of charm and I enjoyed the time I spent reading it. I feel that readers that enjoy other Boom series like Adventure Time or Bravest Warriors will enjoy what Munchkin has to offer. However, as I am not a player of the game, I did feel like there was something I was missing. I was left assuming that the game must be one where players work together, but often stab each other in the back. I’m not sure if that is a great message for kids, but contextualized as characters playing a game, then maybe I can let it slide. These are some talented creators, and I just wish there was a little more to offer from each of these stories.

The art was just as charming if not more so than the writing. The art style of the Munchkin game is quite clearly present, but adapted to the various styles of each of the artist. I think the almost cutesy, cartoony look is what adds to the appeal, and lessens the seriousness, of stabbing your buddies in the back. It is a reminder that this is all just a game and pure imagination.

I enjoyed the first issue Munchkin. Not having played the game though, I felt as though I did not enjoy the issue to its fullest potential. If you have played the game, and are looking for a light all-ages book of short stories, then give it a look.