Story and Art by Moyoco Anno 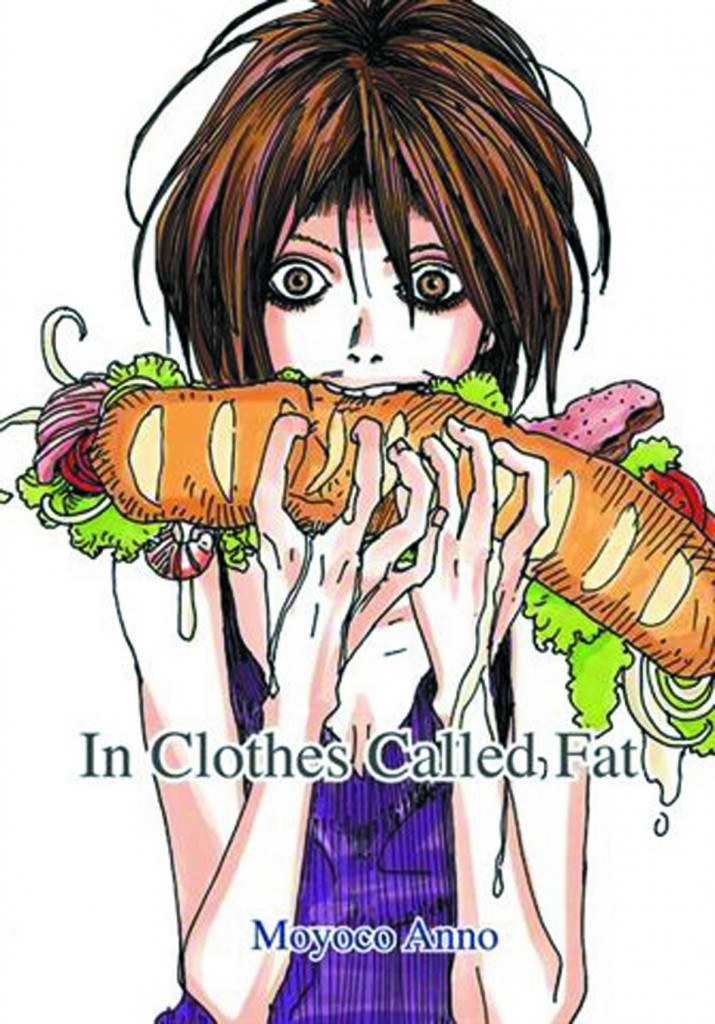 Trigger warning:  In Clothes Called Fat is a story of a woman dealing with eating issues and the emotional stress tied to them.

Moyoco Anno’s story In Clothes Called Fat is a fantastic exploration of the psychological stress weight can have on a woman.  Noko Hanazawa is an overweight office worker.  From the first few pages, readers get the sense that people in Noko’s life treat her as less than human.  Men don’t want to look at her.  Women don’t want to interact with her.  Because of her weight, Noko is objectified in a way that is not often brought up in society.  Noko loses her humanity because of the way she looks.

Noko’s weight is a complicated interaction of emotional overeating and the will of her boyfriend.  Noko links food to comfort, and she overeats regularly.  Noko’s boyfriend, due to his own insecurities, wishes for Noko to retain her overweight appearance.

Noko compares her body constantly to the other secretaries in her office.  They are svelte, posh, and beautiful.  In Clothes Called Fat does a great job of showing prejudices against overweight people while fully humanizing one character.  Noko is desperate to achieve happiness.  If she’s unhappy in her current weight, it makes sense to her to change her weight to change her happiness.

Interestingly enough, Noko is the foil to Mayumi, a cute secretary in the office.  While Noko initially has little concern about her weight, Mayumi is obsessed with Noko’s “disgusting” weight and her own beauty.  Mayumi is ugly on the inside, a monster disguised as a beauty queen.  Noko may not believe she has much in the way of looks, but she believes in the best of others and is kindhearted.

The story is divided up into short chapters, and the cover to each chapter features an overly thin woman surrounded by objects of beauty.  Since the story focuses on the importance of weight to women, it is full of 18+ images.  Namely, Noko and other women are shown naked to emphasize the views they have of themselves.  Sex plays a big part in the story, though it is not explicit.  The artwork is simple, yet effective.  The images evoke just the right emotions to accentuate the story.

In Clothes Called Fat is a great example of a josei story – a manga aimed at grown women.  The central aspects of the story revolve around women’s issues and relationships with others.  Noko and her search for happiness through dieting is one that surely resonates with women of all ages.  It is a single volume, making it an easy gateway to the medium.  The original story was published in Japan in 2002, and Vertical put out an English version in 2014.  It has potential for rereading – the characters and their thoughts are complex and deep, definitely warranting multiple reads.  If you are interested in a more in-depth read of In Clothes Called Fat, CBR has a great review of the story.

Favorite Comic Book Covers of the Week: 12/12/12 A weekly column by Steve Seigh…