Wow! Wow, wow, wow! There is no need for any fancy introductions. Ivar,Timewalker #1  is probably one of the best first issues Valiant has put out recently. Yes, Ivar is the brother of Aram (Armstrong) and Gilad (Eternal Warrior), but none of that is brought up in this issue, nor does it really matter. Ivar has appeared in Archer & Armstrong, but since he is a time traveler we do not know if that is before or after Ivar #1. Again, it does not matter. 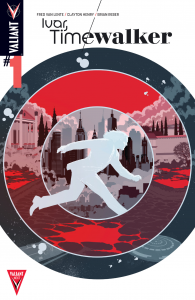 From the get go the story was full of action and works to pull the reader in. Ivar had some pretty hefty explanations from time to time, but I did not feel it was overwhelming or trying to show large amount of exposition down our throats. It served more to put us in the shoes of Doctor Neela Sethi, the doctor that Ivar swoops in, grabs, and starts jumping through time. It was how I imagine I might feel if someone showed  up and started talking nonsense about time travel and tachyon particles. “Blah blah blah tachyon. Blah blah time travel. Blah blah come with me if you want to live.” Wait, what? SWOOSH! And time travel!

Van Lente did a great job making Neela the character the reader can relate to. The premise of the story is not so unlike Doctor Who. Often times the stories are about the companions and not the Doctor. However, it does not feel entirely like the BBC series. Ivar definitely has its own thing going own. I also get a sense that there might be some sort of espionage going on, and possibly a conspiracy. Although, I cannot be certain, this was just the vibe I was picking up on in Ivar, Timewalker.

Van Lente is also a huge history buff, so the seen at the Battle of Trafalgar was quite interesting. It got me to go and read up on the battle, and I can see how Ivar’s appearance fits into how history played out. I’m looking forward to seeing more famous historical events being explored in future issues.

The art from Clayton Henry and Brian Reber is phenomenal as always from these two. Clayton Henry did a lot of the art in Archer & Armstrong, so he has worked with Van Lente quite often in the past. The two mesh together well. Henry’s art lends itself to the tone of both these series and creates a fun and engaging visual for what otherwise could be a dark and gritty story.  Reber should also be given credit as his colors also add to the mood.

BUY IT! Ivar, Timewalker is one of the most accessible Valiant stories on the market, and it is one of the best first issues put out by the company. There are some cameos in the background, but they have no relevance in understanding the story within this issue. It is an issue packed with time jumping, action, and it is just plain fun. I has an almost Doctor Who vibe with a twist of conspiracy and espionage.