As awards season dawns in all the other media, our own “Best of 2014” is wrapping up, and I’m pretty late due to some on-going electronic issues around the old homestead…

Robert, why don’t you just come right out and tell people that you’re incapable of even the simplest trouble-shooting regarding your computer? It’s best to come clean, darling. @udrey

Well, Audrey, I know that you’re right, but what’s that old expression…”Better to remain silent and seem a fool than speak and remove all doubt”?

Anyway, my Top Ten is more a baker’s dozen, although it could have been much larger! As I’ve talked about many of these books so often during my “Lightning Round” this year, I will leave those titles out of the list to provide space for other worthy candidates. 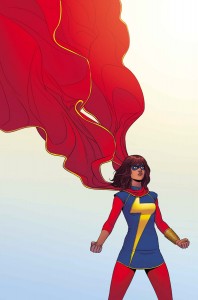 That said, I have the highest regard for Ms. Marvel, Afterlife with Archie, Seconds, Red Sonja, Captain Marvel, Star Trek (both “Harlan Ellison’s City on the Edge of Forever” and John Byrne’s “New Visions” photo-novels), Multiversity, Pretty Deadly, Steed & Mrs. Peel, X-Factor, Nightcrawler, Bandette and so many more that were highlighted during our awards show just past.

The year 2014 was filled with great comics reading, and I hope that this ramble will hopefully intrigue some among you into checking out a few, even though my “curse” has assigned so many to comic book Valhalla. I’ve come up with a few “categories” to help my aging thought processes, the first of which I’ll label…

Sensation Comics was just as it’s title described, and a grand return to form for one of comics’ iconic characters!  Sadly, this spectacular variant cover by Phil Jimenez that features virtually every iteration of  Wonder Woman was very hard to come by when the book first saw print! Hey DC–make a poster and tee-shirt of this!

of the Batman Universe, and with an engaging group of supporting characters, an interesting premise, and charming story and art by Becky Cloonan, Brendan Fletcher, and Karl Kerschl, I hope that it will serve as the bellwether for more series along these fun lines!

Along a darker path was Bitch Planet by Kelly Sue DeConnick and Valentine De Landro, which carried all the punch of a Seventies exploitation film, all whilst delivering some subtle (and not so subtle) messages about our own society. I can hardly wait to see where this book will take us moving forward!

Another book featuring a formidable female lead was Velvet by Ed Brubaker and Steve Epting, which took me completely by surprise, even though I enjoyed their work on Captain America.

I anticipated a “Black Widow-y” sort of series, but I was delighted to discover that it had much more in common with the Modesty Blaise comic strip from the U.K. , and a Seventies period piece to boot! An involving take on the espionage game,  as we follow the travails of Velvet Templeton as she attempts to extricate herself from a frame-up, the inspired “casting” choice of using a veteran agent made this series seem as almost an off-shoot of Modesty herself.

My final choice in this section will be the newest series starring the Silver Surfer as written by Dan Slott with art by the team of Michael and Laura Allred. With slightly off-kilter stories, and art that might have stepped out of a Silver Age Fantastic Four by Jack Kirby, that would have been more than enough to secure its place on my pull list, but the vibe created by the addition of Dawn Greenwood as the Surfer’s companion on his journey has made this one of the books I most look forward to each month. 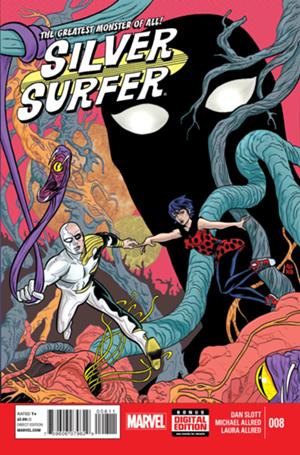 In this group, I’ve lumped story-arcs, one-shots, and graphic novels together in order to celebrate tales that were in-the-main complete, and as I’ve chatted them up quite a bit already, I’ll try to keep this on the shorter side.

(It’s lovely to see Robert finally owning up to being…how shall I say this nicely…overly loquacious? @udrey)

As I’m a push-over for “what if?” scenarios, Seconds was a book that was right in my bailiwick, and in many of yours, too, based on the victory you listeners granted it in the Graphic Novel category, but I’m not going to chat about it here. Three stories featured classic characters having some interesting times are in the spotlight, with Charles Soule’s masterful handling of the Captain America ethos in the “Trial Of Cap” arc in She-Hulk a huge stand-out for me, as was Marguerite Bennett’s take on Lois Lane, but having just re-re-read Black Canary/Zatanna: Bloodspell, I should have campaigned harder for this bewitching graphic novel. Set in various chapters of the heroines’ relationship, it touched on so many different film and comic genres  that it might have gone off the rails, but in the capable hands of Paul Dini and Joe Quinones, it was instead an absolute delight once again having these characters interacting in the “Old 52” way! 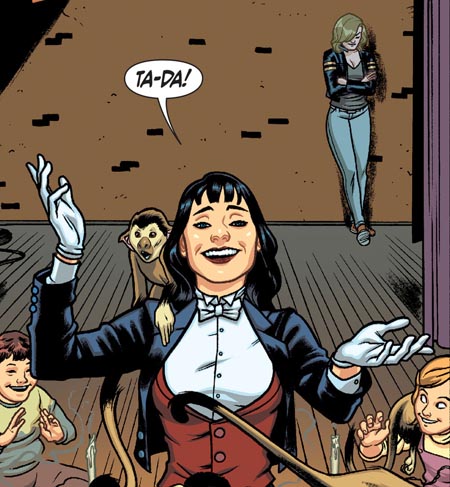 My final section will highlight a few of my favorite moments in comics from the past year, although the absolute acme of 2014 was, without question, my interactions with all of you in our listening, reading, and Forum families, and of course, my continuing friendship with my Podcast co-hosts.  Now, on to…

It’s easy to have deep feelings for Christmas stories, as the holiday brings forth all sorts of emotions, but that those could be created by the Harley Quinn Holiday Special

was pretty darn remarkable! The story by Amanda Conner and Jimmy Palmiotti (wonderful art by Mauricet, too!) hit most of the usual wacky notes, but as it wore on, there was an undercurrent of sadness for a little girl whose life hasn’t been the easiest, and when our favorite lovable nutter lets her Dr. Harleen Quinzel side take on Cindy’s case, we were shown Harley’s better nature. Even though there was plenty of comedy to be had, the genuine emotion of the story and its multiple endings fitting for any old-time Hollywood Christmas movie made this a special holiday treat! 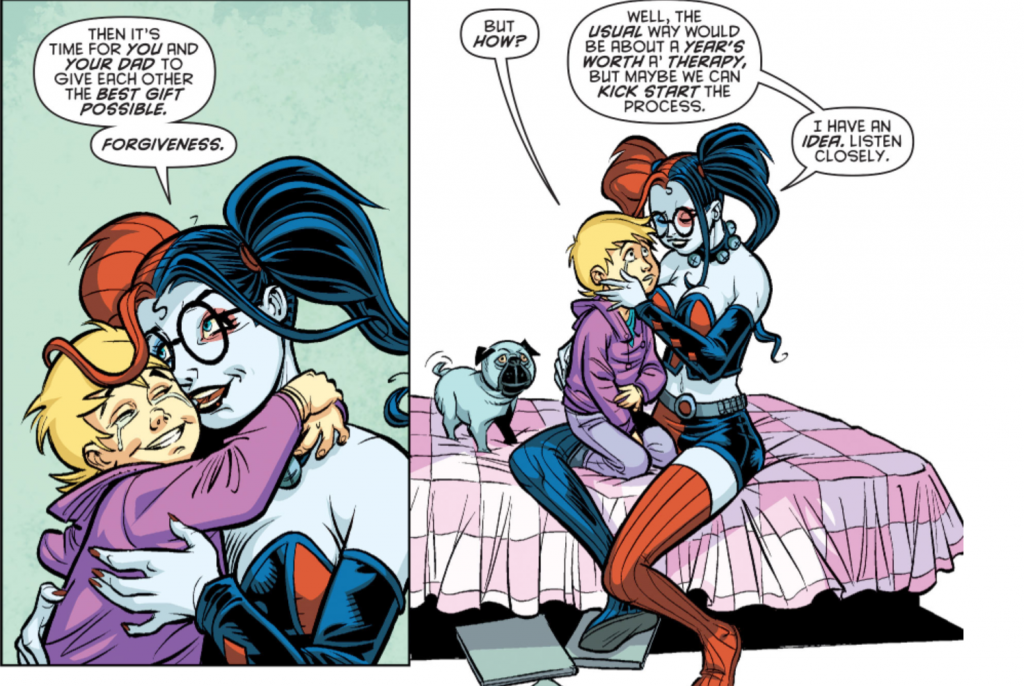 Gail Simone provided two of the entries on this list, as she wrapped up her runs on Batgirl and The Movement. I’ve waxed rhapsodically on-air about how with The Movement Ms. Simone utilized an engaging set of mostly-new characters that I swiftly came to cherish, and she found a way to conclude the series in a manner that made it seem as if  twelve issues were part of the plan from the start; sad certainly, as we may not see this cast assembled under her pen in the future, but where’s there’s hope…

The end of Ms. Simone’s tenure as chronicler of the life of Barbara Gordon was even more bittersweet, but in wrapping up her run, we long-time fans were treated to some marvelous guest-stars that created a what-might-have-been Birds of Prey for the New 52, and that allowed Ms. Gordon some well-deserved smiles, even whilst some of us on the other side of the page fought back tears. 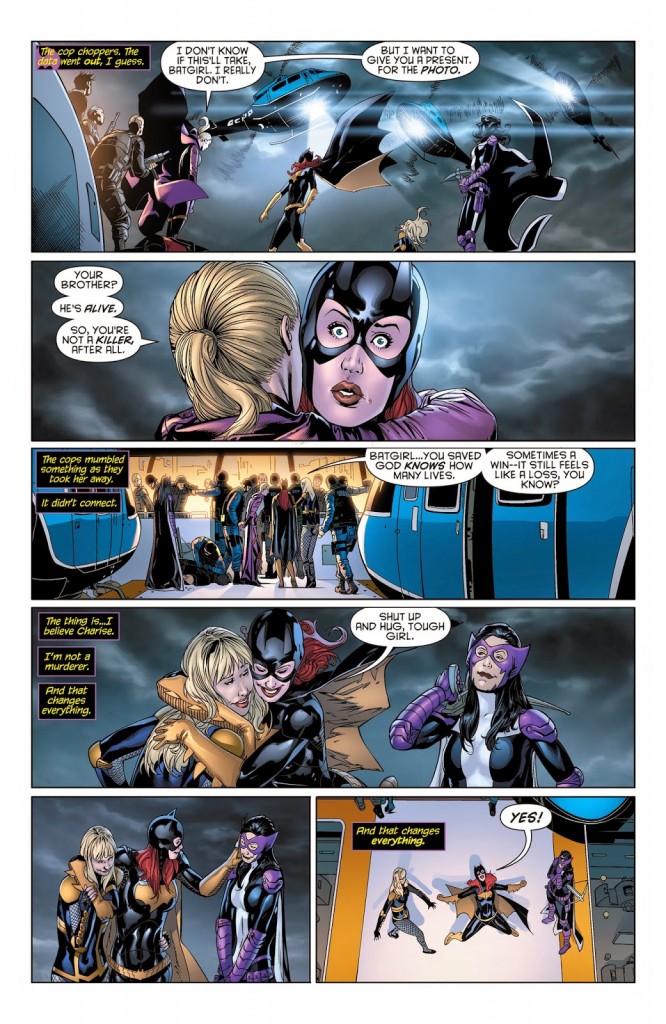 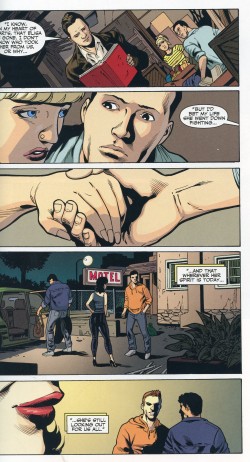 Firstly, there was another run that came to an end, as she took her leave from telling Ghost stories with the fourth issue of that re-launched on-going series. I’ve been a fan of Dark Horse Comics’ spectral avenger from her Nineties beginnings as told by scripter Eric Luke and pencillers Matt Haley, Adam Hughes, and Terry Dodson, and although some of Elisa Cameron’s back-story is different this time around,  her sad demise and resurrection as a protector of the unspoken-for remain. Ms. DeConnick’s story for her final issue centered on the discovery of an un-read eulogy for Elisa that described a summer “that changed everything” many years past where she acted as a heroine even without ghostly powers. While playing adventure games (with the future Ghost attired as “Super-Elisa”), she and her friend James discover the body of their friend Hadley whom they had thought had run away to escape her abusive father. Elisa stays behind to guard the body whilst James goes for help, and there’s a sadness that permeates theses scenes as we know the grim fate that will befall Elisa. The final pages grabbed me emotionally, going from the end of childhood innocence in the past through to how that loss of compassion can manifest itself in the adults that the Ghost deals with in her new reality, all wrapped by the reading of James’ eulogy by Elisa’s present-day friends that concludes with these words, and a silent three-page scene of Elisa in her role as protector:

“I know, in my heart of hearts, that Elisa is gone. I don’t know who took her from us or why…but I’d bet my life that she went down fighting…and that wherever her spirit is today…she’s still looking out for us all”

I’ve saved my favorite for last; the first issue of the new volume of Captain Marvel opens in media res with Carol Danvers and a few unfamiliar compatriots off-world. Flashing back, we see that Carol has been weighing a decision as to taking up Tony Stark’s slyly-put offer to be the Avengers presence in outer space for the next year in the wake of the “Infinity” events. Throughout the issue, we’re treated to encounters with Kit “Lt. Trouble” Renner and her mom, Marina, a birthday party for old friend Tracy Burke, and a lovely moment with new flame James Rhodes, but it’s the finale that took my breath away, and apparently many others considering the Internet buzz, and even a tee-shirt! As Captain Marvel prepares to leave the Earth, the captions reveal her thoughts:

“Have you ever seen a little girl run so fast she falls down? There’s an instant, a fraction of a second before the world catches hold of her again…a moment when she’s outrun every doubt and fear she’s ever had about herself and she flies…

In that one moment, every little girl flies.”

See you in the funny papers…

Robert, do you have something in your eye…