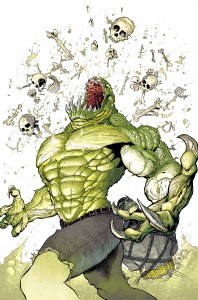 Comic book villains stand as one of the most diverse, most dangerous group of scoundrels you’ll find in any medium. You’ve got the Joker, the Clown Prince of Crime and the bane of Batman’s existence (not Bane, he’s a different guy). You’ve got Doctor Doom, the villainous yin to the Fantastic Four’s well-meaning yang. And you’ve got a whole host of deplorable degenerates who would jump at the opportunity to snap Batman’s spine again or smash the Hulk’s fat green face into the ground. But for every powerhouse that graces the ranks of these gifted baddies, there’s one miserable, sniveling creep who never manages to earn the respect of his ne’er-do-well comrades despite his best, most enthusiastic efforts. Many of the most fascinating villains of the medium fall into the “sniveling creep” category, but that doesn’t make them any less of a creep. Does that make any sense? No? Good, let’s move on.

So, because we’re so sympathetic here at Talking Comics, we decided to show our appreciation for these not-so-sympathetic rapscallions with a column that doesn’t undercut their canonical importance like the comics usually do.

So, without any further ado, this week’s scoundrel is………. Killer Croc! Introduced in the pages of Batman #357 in March 1983, Killer Croc quickly became of Batman’s coolest but underused and undervalued baddies. Power to the sniveling creeps!

Who is Killer Croc? 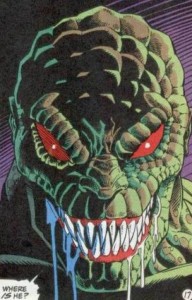 Like most villains, Killer Croc’s alter ego remains hidden in shadow, unknown to everyone except the gutsy few who would dare to dig deeper and find out. A few Talking Comics writers ventured into the criminal underworld to discover who this reptilian baddie really is, losing a few limbs in the process but emerging victorious. Based on the information given to us by a man shrouded in shadow (and a long black trench coat), we found out that Killer Croc once went by the name Waylon Jones. Disfigured by a horrifying skin disorder that endowed him with an imposing size and some……noticeable reptilian attributes, Jones once aspired to be a powerful crime lord before falling victim to the “big ugly brute” trope his writers decided was a better fit for him.

There are many incarnations of Killer Croc, from the smaller, grayish version seen in Batman: The Animated Series to the monstrous version who appears early on in Batman: Hush. You’d think that when it comes to fisticuffs between this hulking pile of scales and the Dark Knight that the pile of scales would pummel Bruce Wayne with little difficulty. Not so. Despite his formidable size and an impressive skill set, Killer Croc remains tragically and almost criminally underpowered. Batman usually beats him to pulp in a matter of minutes, undercutting his significance as a villain and selling him as a bulky yet clumsy addition to an impressive rogues gallery. 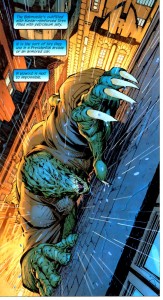 ……..He has none now. At one point, Croc stood tall as one of Gotham City’s most brilliantly imagined characters, operating both alone and as hired muscle for various villains. In recent years, he’s become much more brutish and much less dangerous than his creators probably intended. All of the ingredients of an incredible villain are present, but whoever writes him these days prefers to dumb him down and strip him of any redeeming qualities.

How Can He Be Redeemed?

Croc hasn’t flashed his ugly mug too much in DC’s New 52 continuity, so it’s unclear just how badly they want him to stick as a Batman villain of any significance. Scott Snyder’s two part Clayface story (slapped right between Death of the Family and Zero Year) proved that DC’s most gifted wordsmith can breathe life into his dry, hollow antagonists, but that doesn’t seem too high on the list of priorities for his editors.

So, to answer the above question, it’s unlikely that DC will push Killer Croc to the front lines for another go at Batman any time soon. That’s a damn shame, mainly because reptilian baddies just kick so much ass. All of them except this one.