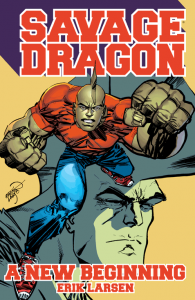 I was enjoying the heck out of this trade paper back collecting Savage Dragon #193-198 when I wondered, “Why am I not reviewing it for Talking Comics?” Part of it was the fact that it’s not NEW. I mean, these are new issues, new stories, but despite the subtitle — a New Beginning — and significant twists in the plot, this is the same Savage Dragon we’ve come to expect for the past TWO HUNDRED issues (which, by the way, is the longest run on a single title by a creator in the history of comics). Why review it?

For exactly that reason!

I’ve made no secret of my contempt for the cult of novelty that the Boys in Marketing (BiM) are foisting on all of us — and the fact that Image has to package it’s great, long running comic as a new beginning is evidence of the BiM’s insidious success. Here’s why I love Savage Dragon: A New Beginning.

Kirby-esque? Kirby-tastic! Larsen has always been openly Kirby influenced. That comes out more than ever in this TPB. It makes sense since Kirby was a master of the Slugfest, but also the ridiculously inventive villains — just one after another — and imaginative geographies. A hole in the street leading to many levels of the underworld? With multiple species of warring inhabitants? Sure, why not? I’ve been promoting a lot of Kirby love on Talking Comics. Savage Dragon is good at that.

Trade paperback! There’s something about glomming into all of this comic content in one sitting (rather than a month at a time) that definitely increases my quality of life. I talk about the Kirby-esque? Well the sheer abundance of it in a TPB makes it that much more enjoyable. I talk about the slugfest? Oh, it’s like having a mouthful of lobster, something you usually only get in small bites. To quote Stalin (and why shouldn’t we), “Quantity has a quality all its own.” Trade paperbacks rule. Beaucoup pages!

And then there are its own inherent virtues: the writing is good, the characters engaging when Larsen wants them to be. The art is great. In the sequence when Malcolm transmutes … it’s very emotional! The only thing I’m not especially fond of is him being in high school. Could just be me being old. High school is no longer an interesting challenge for me. Really? There’s a dance? Go. Don’t go. STFU. But even so, it’s done very well and doesn’t cut into my enjoyment of the book as a whole, and even allows me to get my snark on.

Verdict: Yes, buy it! The one benefit the New Beginning offers is that it’s an excellent place to enter the story. You get a New Beginning with nearly 200 issues of experience backing it up. I’m not pretending that I’m discovering this or even re-discovering it. I’m just selling water by the side of the river. Have you tried the water, lately?