Comic books don’t have the best reputation for representing female characters (though it’s getting better), for having much racial diversity (again, getting better), and while there are issues with these demographics, comics’ representation – especially in the Big Two – of queer characters are even worse. But like any type of social movement things take time. So it is natural to expect comic books to slowly but surely begin to have diversity in characters’ sexual orientation, which, slowly, they are. So here is a look at some of the biggest moments, characters, and teams in Marvel’s march towards further progress.

Northstar – Out of the Closet and Down the Aisle 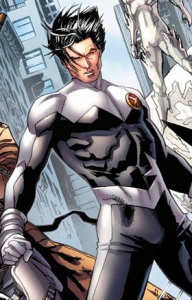 Northstar – Jean-Paul Beaubier – is a mutant with super human speed, who can fly, and shoot kinetic energy from his body, you know, the usual. He first appeared in 1979 as a member of the team of heroes called Alpha Flight – Essentially the Canadian Avengers, and yes, their leader does have a maple leaf on his uniform. Creator John Byrne had intended for Northstar to be gay from the very beginning, but was only able to hint at it due to Marvel’s policy forbidding the depiction of openly homosexual characters. It was not until 13 years later that then Alpha Flight writer, Scott Lobdell, was given permission to let Northstar come out.

The actual story itself was a bit hit-and-miss. Basically, Northstar had a taken in a baby girl who was later revealed to be HIV positive. This stirs up the media sympathy. This angers Captain Maple Leaf (clever name, eh?), whose son had died of AIDS, but no one in the media cared because he was gay. Maple Leaf goes to the hospital to kill the young girl, so in order to elicit sympathy from him Northstar reveals that he too is gay. Alpha Flight was not an overly popular title at the time, but this single issue created enough buzz that it 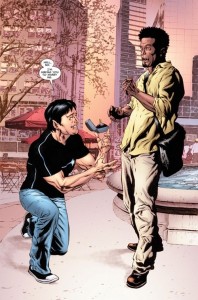 completely sold out in a week. Northstar, becoming the first openly non-straight character for Marvel is very important, and at the time was great for visibility of non-heterosexual characters. Unfortunately his sexuality was essentially never mentioned again during the Alpha Flight run that lasted until 1994.

Fast forward to 2012. Northstar has now been part of Alpha Flight – a few different times – and joined the X-Men for a stint. He has also been dating non-super powered sports agent (he’s also a professional skier, naturally) Kyle Jinadu since 2009. When asked about their eventual engagement Marvel’s editor-in-chief Axel Alonso said, “When gay marriage became legal in New York State, it raised obvious questions since most of our heroes reside in New York State. Northstar is the first openly gay character in comics and he’s been in a long term relationship with his partner Kyle so the big question was – how would this change his relationship?” So it happened, in Astonishing X-Men #50, Marvel’s first opening gay character got married in New York City. Progress.

Rictor and Shatterstar – Bromance to Romance

Rictor first appeared in X-Factor #17 in 1987. He is a mutant who has the ability to release seismic energy and create earthquakes. Shatterstar is a bit more complicated, he’s a genetically modified time traveler and dimension hopper who comes from a planet called Mojoworld – naturally. During one of his time traveling jaunts Shatterstar landed on Earth, and after a few misunderstandings ended up becoming one of the founding members of X-Force. During the early 90s Shatterstar and Rictor were both part of Rob Liefeld and Fabian Nicieza’s run on X-Force, which is where their friendship and relationship began. When Jeph Loeb took over the series a few years later he intended to write the two of them into a relationship, and gave fans lots of subtext that this was a possibility. 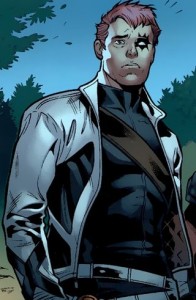 Unfortunately this was not carried on by his successor and nothing overtly romantic was seen between the two.

The characters came and went from different series, but in 2005 – during the House of M story arc – Rictor lost his mutant powers. By 2009, he had joined the mutant detective group X-Factor, in Peter David’s series by the same name. The series featured both of the guys and David continued what Loeb had started by developing the two’s relationship and dropping subtle clues along the way. During a story in X- 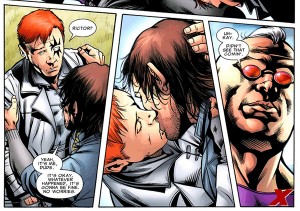 Factor Vol 3, Shatterstar becomes possessed and eventually ends up attacking Rictor. After a fight he eventually breaks free and recognizes Rictor. Upon this realization the two embrace and share what is the first same sex kiss in Marvel comics.

While this was major progress, Shatterstar’s creator, Rob Liefeld was none too pleased, “As the guy that created, designed and wrote his first dozen appearances, Shatterstar is not gay. Sorry. Can’t wait to someday undo this. Seems totally contrived.” Thankfully most people don’t take anything Liefeld says, or draws, seriously. If you need an example just google his name (his drawing of Captain America is a personal favorite of mine). On the other hand, Peter David said “I was trying to develop a storyline that would be of specific interest, emotionally, to Rictor and, honestly, a lot of fans were asking to see Shatterstar return and to see Rictor and Shatterstar pick up where they left off.” So no, Mr. Liefeld, it was not totally contrived, you were just reading their stories through a heterosexual lens.

Young Avengers – “Am I the only person on this team who’s straight?!”

Young Avengers might not be a specific moment, but if any series has pushed forward on representing non-heterosexual characters it is this one. I’m going to look at four specific characters from the series that exemplify the best of what Heinberg/Cheung and  Gillen/McKelvie have done in increasing visibility of various sexual orientations. 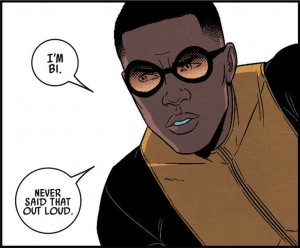 David Alleyne – aka Prodigy. He was first introduced into the Marvel world as a student at Xavier’s School for Gifted Youngsters. He had the ability to telepathically absorb knowledge of those around him. He later discloses that he not only gained knowledge and talent, he also got “other stuff”, which leads him to have an awakening as a bisexual. In popular media a female character exploring her sexuality, or just being bi-sexual, is something that is fairly common, e.g.: Willow in Buffy, Brittany in Glee, and Piper in Orange is the New Black. While obviously not being straight is at least somewhat of an issue for any gender, it is still far less common for a male character to be bi-sexual, much less an African-American male. Using an already established character to break these standard bifurcated gender roles was a great move by Gillen. He has taken a sexual identity that is nearly invisible in popular culture and put it at the forefront of his story.

Billy Kaplan and Teddy Altman – aka Wiccan and Hulkling. Billy and Teddy are what you could consider the heart of the Young Avengers team. Both are fan-boys who geek out when they meet past 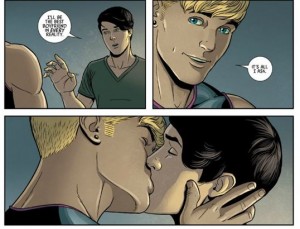 heroes and chat about Game of Thrones with Loki. What makes their relationship so important is how much of a normal teenage couple the writers make them. Aside from when their back-story is told, their sexuality is almost never even discussed. Instead their personalities, skills, and relationship with their friends and each other are what is elaborated upon. We also get to witness Billy coming out to his parents, he’s actually about to tell them he’s a superhero but they interrupt him and say that they already knew and are so proud of him and happy he and Teddy found each other. While it wasn’t what Billy had in mind at the moment, it is certainly the reaction any teenager coming to terms with their sexuality would hope for from their parents. While it’s so easy to just shrug off a gay couple being portrayed the same as any heterosexual couple, or parents being accepting of their son being gay as the new normal, this is something that’s not often at the forefront of a story, much less a superhero story, and even less so one aimed at younger readers. Being one of the few male LGBTQ+ couples in the marvel universe, the depiction of Billy and Teddy is so important, not just in that it shows a healthy teenage relationship, but that it doesn’t fall into the typical, borderline offensive, clichés in the process.

America Chavez – aka Miss America. The way Gillen revealed her sexuality is what really stuck with me. 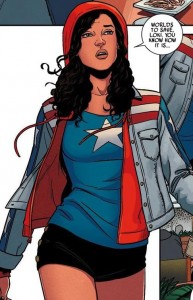 It was’t made into a big deal, it was through one offhanded comment made at the very end of the series when Kate asks her about a boy she had once kissed. America replies with “Only once. Didn’t stick. It’s always a shame when you end up as a damn stereotype. “Yeah, I went with a boy on my first team, but I was just experimenting.”” America is depicted as a strong female character with complete agency – which she probably gets from her badass lesbian moms. She just also happens to be a racial minority and queer. If someone who is not white wants to find a comic book character to identify with racially, they would have very slim pickings. But this especially applies if you are also a woman and also not straight. America is a great addition to this very under represented demographic in the world of comics, for me, she is the breakout star of the series.

So over the last decade Marvel has made some pretty great steps in regards to its representation of various sexualities. There are of course other characters I didn’t even bring up, like Guardian of the Galaxy members Phyla-Vell and Moondragon, Karolina and Xavin of the Runaways, and X-Men Roxy, Anole, Graymalkin, and Mystique (bet you didn’t know she was bisexual). The problem is most of these characters are far from the mainstream, with Young Avengers probably being the most well known of the lot, and that’s saying something. So while Marvel is definitely moving in the right direction, there still is plenty of improving left to do.