It was two years ago when Dark Horse premiered their first issue of Star Wars. Following Disney’s acquisition of Lucasfilm, Dark Horse lost the Star Wars license. I’ve read a fair share of the very early Dark Horse Star Wars titles (Tales of the Jedi, Dark Empire, et cetera), and well over 130 Star Wars novels from Bantam and Del Rey. I stopped counting at some point. I also own a very detailed and accurate replica costume of one of the iconic characters from the franchise, and I often get invited by Disney to appear at official events. 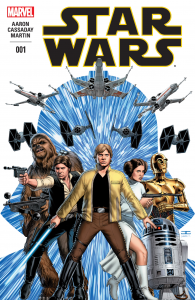 The point I am trying to make is I am a “super fan.” I love everything I have read about the Star Wars universe, but now everything I know is being politely tossed out the window. All of the old stories still exist, and the old novels will continued to be sold under the “Legends” banner. This banner separates them from the new stories, and places them in their own continuity. It hurts a little that some of the characters I grew to love in the expanded universe stories may never see the light of day in this new continuity.

This was always a possibility, as the expanded universe was never officially recognized as canon. The only things ever declared as being in continuity are the movies and the television series (The Clone Wars and Rebels).  It is very easy for some people to say, “well it wasn’t officially canon, so who cares.” What I want people to realize is that there is almost thiry-years of expanded universe stories from role-playing games, comics, video games, and novels stretching from 10,000 years before A New Hope to over 100 years after Return of the Jedi. There were some holes and conflicting stories, but for the large part it was unified. Disney and Lucasfilm want to create new movies and television stories that are not beholden to this vast established universe. (Honestly, it is a bit challenging to find a space to cram in a new creative story with the original characters.) Moving forward, comics and novels will be a part of the canonical Star Wars universe. Marvel’s Star Wars #1 is an important release because it symbolizes the establishment of an expanded universe that is canon and falls into the continuity of the movies and televisions series. So let’s put this baby under the microscope and see how it does.

First off, let’s talk about the art of this book. We can see Mark Hamill, Harrison Ford, and Carrie Fisher on the pages of this issue.  John Cassaday does a great job at capturing the likenesses of the characters, without stepping away from his style of art. What I like about Cassaday’s art is the characters look like real people, but everything still has a slightly cartoony feel to it. This is also in part with Laura Martin’s colors. Her colors are bright and bold, and sell that almost animated rendition of real life. It borders on the realistic and the imagined, and that is a great fit for Marvel’s Star Wars. Vader in particular looks like an animated rendition of himself, and reminds me of some of the art found in the classic Marvel Star Wars. Cassaday and Martin’s art serves as a sort of spiritual predecessor that bridges the old and the new.

Jason Aaron’s story was a bundle of fun that captured the feel of the movies and the many Star Wars stories that have come before. The debut issue featured all of the original players from Episode IV: A New Hope,  Luke, Leia, Han, Chewie, Threepio, Artoo, and Vader. Aaron was able to give each of them a moment in Star Wars #1. Everyone has a favorite character (mine are Han and Artoo), so everyone wants to see their favorite doing something radical. Kudos to Aaron for giving all of us a reason to stay and continue reading.

Characters aside, the story itself was nothing wholly original, but it provides a perfect context for new readers to start reading Star Wars comics. The point of this issue was to stir up that nostalgia, and give the readers the atmosphere, feeling, and mood of the original movies, and in that regard it is a success. The issue is just darn right fun. I did not care that this is yet another mission where something goes wrong and the Millenium Falcon is unreliable yet again (happened so many times, it is not a spoiler). That is half of what makes the Star Wars movies so fun and enjoyable. There was plenty of action, blasters, lightsabers, and quips from our heroes to have us fist pumping. There is room for the story to go deeper in the coming issues, but I am thankful Aaron did not go too far down any exposition rabbit holes. He gave us just what we needed to grab our attention in a first issue.

I’ll admit. I was skeptical, as this was essentially a New-52 reboot of all the years I spent reading about the Star Wars universe. However, by sidelining those stories, Disney and Lucasfilm are free to create new stories that will fall in one solidly united continuity of the films and expanded universe. I have a son on the way, and it will be nice to use this as a starting point into the expanded universe. One of the most uttered lines of the series is “I have a bad feeling about this,” but I have nothing but good feelings for what is to come. Star Wars #1 captures what we hold in our heart as traditionally “Star Wars.” BUY IT!