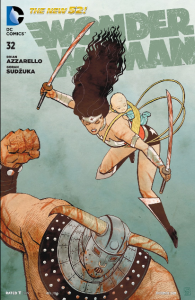 I’m not someone who keeps current, or even values keeping current, so I wasn’t planning on doing any of these Top 10s or 5s. Then I got to thinking … and as so often happens when I do that, I made a sandwich. Then I realized that there was one comic reading experience that really stuck out for me this year.

It has been spoken of critically on the podcast, probably as much as anything. Nevertheless, rereading the last dozen issues this week, I am convinced that this is a genuine, no exaggerations masterpiece. I’m going to counter some of the arguments that were made, because those have been in the air. But I’m really writing this piece because the comic reminds me exactly of why I love comics. When God said, “Let there be comics,” I’m certain that this is what he meant.

I’ve given a lot of thought to Wonder Woman this year, starting in the spring, when Talking Comics did their Women in Comics Week. I fell hard for the Chiang/Azzarello Wonder Woman, which came to an end in 2014. It was, easily, the most satisfying superhero reading experience of the year, but folks on the show (Bob spoke about it the most, but others concurred) were critical. They argued that it was inauthentic. It was “a great story but not the real Wonder Woman.”

I don’t usually let such things get in the way of my enjoying a book. I’m nearly fifty. And issues of authenticity are knotty and unsatisfying. But I respect the Talking Comics crew and Bob in particular. When they say things like this in these very strong terms, I try to understand.

So, I went to the archives and read a lot of Wonder Woman. I was referred to George Perez’s years as the last great Wonder Woman, and those were, indeed, fantastic. It was different from Chiang/Azzarello. But differing versions of the hero twenty years apart is not surprising. Every age gets the Wonder Woman it deserves. (Did Trina Robbins say that?) My dilemma wouldn’t be solved by comparing different versions of Wonder Woman one to another.

The argument was that Chiang/Azzarello missed the core of the character, her love for all humankind, her relationship to the Amazons, her origin, coming out of clay. I disagree. The  New 52 series brings out her love for all, again and again. Her forgiveness of Ares, Hera, and the First Born, for example. Her pleading with Athena for the life of Zola. The crew she forms around her with Stryfe, Hera, her brother, and Hermes. And her relationship to the Amazons who she loves (and saves) despite their exclusion of her. 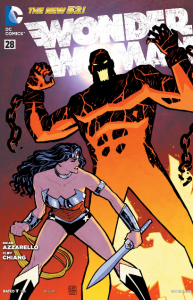 The new series did negate the “born from clay” origin story, but did so thoughtfully and with consequence. In truth, I was never convinced that this origin was intrinsic to the character, as some have said. Any number of mythical figures have been formed from clay, and many mythologies (Greek, Sumerian, Egyptian, Hebrew) have posited that the first man was born from clay. At the very least, I find another virgin-birth-purity-equals-moral-purity-and-superiority story very uncompelling. Are we really arguing that she’s a better character if her origin is untainted by sex? Are children more or less worthy according the circumstance of conception?

The most serious charge leveled at the Chiang/Azzarello stories seems to be the idea of the Amazons having a dark secret. In fact they have two, and they are very dark. First, the Amazons, in order to replenish their ranks (is that what the kids are calling it these days?) take to sea and capture a ship , engage in a night of debauchery with the sailors, and then kill the sailors. Second, when the concomitant birthing begins, any male children are set out to die (but actually adopted as slaves by Hephaestus to work in his smithy). So, those are pretty bad secrets: rape, murder, and infanticide (Piracy is okay, though. We like pirates).

There are two reasons why I thought this was actually a brilliant development for the world of Wonder Woman.

Firstly, the revelations are completely in keeping with the tone of Greek mythology, which is nasty, vicious, and weirder than even creator William Marston imagined (he had his own weirdness, but there was nothing Greco-Roman about it). This has been one of the virtues of the run as a whole, mirroring the dark and foreign tone of Greek mythology. I love that. Having island-bound women who kill sailors — think of Scylla and Charibdus and Circe — is as old school as it gets. In fact, the idea of an island of peace loving warrior women is far more preposterous in a Greek light than what Chiang/Azzarello give us. Further, feminist scholars have cited the island dwelling witch monsters as signs of patriarchy’s fear of women’s agency and sexuality, AND they have recognized the value of these symbols as transgressive gender tropes and have appropriated them for their own use. I am okay with this story element. 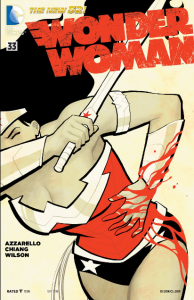 Secondly, Themyscira and Paradise Island, as ideals, are static, boring, and regressive, and don’t make for good stories. The only reason to have a utopia in a story is to discover the ways in which it is NOT utopian. “Utopia” (from Latin) does not mean “prefect place,” it means “no place.” This was Thomas More’s point when he coined the term in the 16th century: the perfect place cannot exist on Earth, and the desire for such a place is an invitation to Evil. By exploring the nature of their failings, Chiang/Azzarello don’t subvert the nature of Amazon goodness, but amplify it. Is there a more perfect test of the goodness of the Amazons than the return of their brothers and sons to Paradise Island? Marston’s vision of an unchanging land of inherent female goodness is as diminishing as any misogynistic trope. A two-dimensional female stereotype is no more empowering simply because you place it on a pedestal and submit to it.

The argument is that there is an ideal Wonder Woman — platonically perfect in its Wonder Woman-ness — which is undermined by the new vision. The ideal vision is based in Marston’s vision at her creation: Wonder Woman as a voice for peace, love, and forgiveness. Wonder Woman as a mentor to other women, and a peace maker — even as she regularly beat the crap out of bad guys (a given in comic books). All of that is present in Chiang/Azzarello, but not as proverb or cant, but as an ideal that’s genuinely hard to enact. This is best exemplified Wonder Woman’s forgiveness of Ares (an old enemy) as he “dies,” being given the role of God of War, and wrestling to act consistently and conscientiously within her values. The fact that it’s hard is essential, and makes for a great story. If Wonder Woman does good simply because she is good, then there is nothing here for us. It is meaningless.

(The other part of William Marston’s vision which no one is sorry to see go is the devotion to bondage and spanking. Jill Lepore, in her book, The Secret History of Wonder Woman, makes it clear this fetish of Marston’s was not just a colorful side note, but was central to his vision of 1940s Wonder Woman. Lepore prints one note from Marston to the artist describing at great length the exact specifications of the chains and ropes that bind a character in a particular scene. BTW, I read Lepore’s book after hearing the discussion on Missfits. Thank you!) 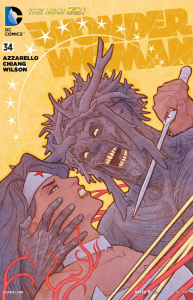 The greatness of the Chiang/Azzarello Wonder Woman is not that they have done this thing in a way that fascinates me, but that they have done it so amazingly well. I was enraptured by it before I got involved in the arguments and the arguments never overtook the wonder of the fantastic writing — a coherent serial tale told seamlessly over 35 issues (!!!) — and art that brought out Wonder Woman as a formidable, puissant, agent of her own destiny who, without hesitation, helps those who need it. Yeah, that’s Wonder Woman.

(And completely avoids oversexualization! It’s sad, I know, that this should still be a big deal. I don’t mean to damn with faint praise, but it was a revelation to read a modern superhero comic that utterly eschewed the cheesecake! And the first issue post-Chiang/Azzarello only sharpened that point. Theme song for issue 36: They paved Paradise Island and put up a parking lot …)

The first 35 issues of Wonder Woman’s New52 run are a stunning achievement. Great storytelling abounds as well as extraordinary kick-ass-ed-ness. The best superhero work of the year was happening in Wonder Woman. I wish more people had noticed.

ALSO: Features the best Orion that has been written since Kirby was alive!

ALSO ALSO: I loved the digital Sensation Comics Featuring Wonder Woman, but that one scratched a different itch for me, less profound and moving, but still a genuinely enjoyable experience. It’s possible to love two different versions of the same character without falling into a robot-like-feedback-loop that brings the ship to the edge of self-destruct. Omigod, the Gilberto Hernandez issues were to DIE for.