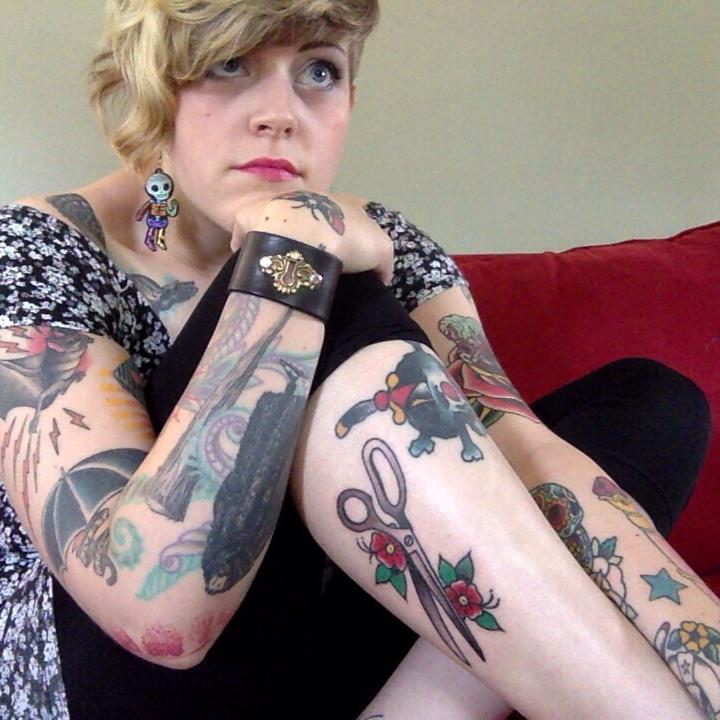 I live in Halifax, Nova Scotia. I am a comic writer and artist who occasionally works for what’s been voted several times as the best comic shop in the world, Strange Adventures.

What I do: I am the series writer of the Bravest Warriors comic, as well as the NYT Bestselling Adventure Time: Seeing Red and the upcoming Adventure Time: Bitter Sweets (Nov 5, 2014). I wrote a Fraggle Rock miniseries and am currently writing Edward Scissorhands. I collaborate with the podcast Welcome to Night Vale. I run a group online for girls who work in comic shops. I do a biweekly podcast called Less Than Live with Kate or Die, which I think is pretty fun, and is all about comics. I travel excessively, which is part of why this comic rarely updates. I contribute Kate or Die strips to ComicsAlliance every other Monday, though!

I am self-taught in comics and have been making them since late 2010. I like to make lip-synch videos and edit things together to music. I dropped out of art school and look at me now, mom!

It’s still the best. Every single issue shocks me in some way, and I read an incredible amount of comics, so that’s something. Like Fraction and Zdarsky (and McKelvie and Gillen, who I’ll get to in a second) they’re a perfect team. You can always tell, in comics, when a crew just clicks. Fiona Staples and Brian K Vaughan have perfect comics chemistry. This story, about a couple from warring families and their daughter who everyone wants or wants to kill, is a sci-fi tale of star-crossed lovers and ogres with giant scrotes. Again, it’s adult. It’s gorgeous. I love it.

THE WICKED AND THE DIVINE

I love this comic, I only understand about 60% of what’s going on, and I don’t care. It’s gorgeous and a ton of fun. This story of gods who return every century(ish) to inhabit the bodies of young people and make them celebrities is total bait for somebody like me. It helps that all the characters are based on real people from pop culture (Rihanna’s turn as Sakhmet is pretty drool-worthy, the Bowie-esque Lucifer is a total babe) and have awesome style. It’s goth. It’s so goth. None more.

I can’t wait for this book to come back. Hey, we’re at number 4 and they’re all Image Comics. What a surprise. This horror-western (my favourite genre, I think) draws heavy inspiration from folklore and the occult, so sign me the hell up. It’s the tale of Death’s daughter, double-dealing, demons and deserts. See what I did there? I’m a writer! Kelly Sue DeConnick and Emma Rios are also one of those perfect teams. Emma’s art is stunning. You can get all that exists of it in a book for ten dollars, so quit stalling and go do it.

Goddamnit, I forgot the Marvel stuff! Marvel did so much for female characters this year, but nothing tops both She-Hulk and Ms Marvel, for me. I adore KSD’s Captain Marvel, don’t get me wrong, but I fell in love with Kamala Khan and Jennifer Walters instantly. Ms Marvel is the story of a young Muslim girl who gains shape-shifting powers and takes on the mantle of the former hero. It’s beautifully illustrated by Adrian Alphona, who drew a great deal of Runaways. Willow Wilson’s writing is fun, hilarious and beautiful. I personally loved the two-issue arc drawn by Jake Wyatt, featuring Wolverine and some giant crocodiles.

As for She-Hulk, that series got cancelled for some idiot reason that I’m sure is very understandable, but I’m still so sad. Kevin Wada’s covers are unbelievably good. Soule’s writing and understanding of both the intricacies of law and how to do fun adventure stories is stunning. Javier Pulido’s art is the best, just the best, oh how I love it. You can grab the first trade paperbacks of both these series now, so treat yourself for Christmas, why don’t you?

Follow
I write Bravest Warriors, Fraggle Rock and Edward Scissorhands. I work on a lot of things you like.