FacebookTwitterPinterest
@kellysue
Bob Reyer reached out to Kelly Sue DeConnick for her “Top Five of 2014”, but Ms. DeConnick graciously demurred, saying:
“I would do almost anything for you, but I avoid those lists like the plague. There is NO WAY I get out of it without pissing off one of my colleagues as we are a sensitive and prickly bunch.
My usual sleight is to choose a book by Matt, as no one can take offense to my preferring my husband, but I can’t get away with that for a Top Five.  So…Sex Criminals.”

When Bob asked Kelly Sue which of her book’s would be Matt’s favorite she said that it would be…
“Either Bitch Planet or Pretty Deadly.  PD, if I had to guess. “ 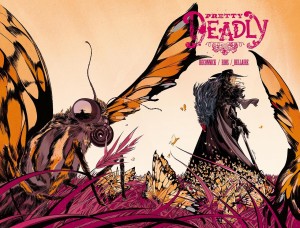