The Five Best New Things I Discovered in Comics this Year.

This is Jeremy Whitley. I write comics. I write Princeless and My Little Pony and…other stuff. But more than anything, I love comics. Like many of you, I have a pull list that’s too long, an even longer list of books I’d like to be reading, and not nearly enough time. Unlike most of you, I also did fifteen conventions in 2014 (not recommended) and that means I got to see some amazing things and meet some amazing people (recommended) that might have gone under your radars. So, when Bob asked if I’d be interested in doing a top five list for the site, I wanted to go with things that I’ve discovered this year. Understand, I’m not trying to Columbus things. I’m not pretending that other people didn’t get here before me or that some of these things aren’t already popular, but these were the thing that I wasn’t looking for that really made my comics year better:

“Agents of the Realm”
I’ve always like the idea of “Magical Girl” anime. Girls discover that they have special powers and that they have the potential to save themselves and the world. It’s cool. Unfortunately, it tends to come with a bit of baggage that I find it hard to get over. The over sexualizing of girls who are teens or younger and the tendency against representing a diverse array of girls (in respect to skin color and body type). 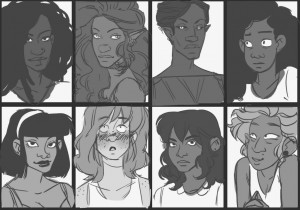 So, when I found the webcomic “Agents of the Realm”, I was crazy excited. A magical girl comic where the girls are roughly college age, are diverse, and their battle dresses aren’t totally impractical tiny skirts. I was all in from page one. The fact the Mildred Louis (the creator, writer, and artist) is crazy talented sure doesn’t hurt. The fact that she is herself a black woman probably helps with the diversifying as well. I don’t read a whole lot of webcomics, mostly because I spend too much time staring a screens while I work, but this one has me hooked.

“Los Pirineos”
If you like comics or especially if you make comics and you have never been to Heroes Con in Charlotte, NC I highly recommend it. It’s a comic con for comic people. You will, without fail, see writers and artists you don’t see at other shows. Why? Because Heroes Con is really good to comic creators and that’s caused it to become a lot like summer camp for comics creators. There will be karaoke, there will be barbecue, and there will be late night drinking and talking comics and philosophy at the Westin bar. 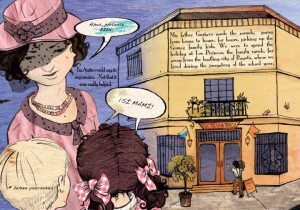 And much like summer camp, every time I go to Heroes I make new friends. For instance, I was one of the last remaining people closing down the bar at 2 AM on Saturday night/Sunday morning and I found myself talking to a woman I didn’t know through a mutual friend of ours. Her name was Sara Woolley, a fact I would have promptly forgotten at 2 AM if it weren’t for the modern miracle of business cards.

So the next day I cross referenced the business card with the map the next morning and found her table. She had a lot of awesome prints but what stood out to me was her original comic “Los Pirineos”. It was a comic all about growing up in Columbia and being an immigrant and my god was it beautiful. We swapped books and it was the first book from my haul I read. If you follow the link about you can check it out, because it’s really something special.

“Sexcastle” by Kyle Starks
This one is for sure the odd man out on this list, but I couldn’t leave it out. Kyle has been a member of that special class of friend that has only developed in the last few years – a “twitter friend” – of mind for a while now. I had seen him at some shows but had never really picked up his stuff. When he put up the Kickstarter for something called “Sexcastle” I had to check it out. I put my money in and got my digital copy. Then I forgot to read it before I ran into him at Heroes Con. So I bought it then and there and I’m so glad I did.

This book is bonkers. It’s the ultimate 80’s badass action movie. It’s about a loner who gets out of jail and decides to leave the life of danger and espionage behind to pursue a good and peaceful life. But when the thugs that run the city attack the flower shop where he works, he has no choice but to take the fight to them. Kyle writes and draws it and however amazing it may sound, it’s better than that. I promise. 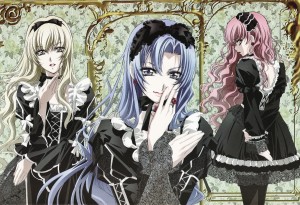 I’ve frequently joked with my friend Dave about generalizing tumblr followers. For instance: he seems to have an unusual number of nazis and cartographers following him. As I discovered from following back a number of my early tumblr followers, I seem to have a lot of lesbian librarians following me. Or some combination of those two things. That means I can always count on a lot of incredibly cute (and occasionally incredibly racy) girl/girl fan fiction crossing my dash. This is why I don’t check my tumblr dash in public. But Princess Princess is a girl/girl fairytale and quite a bit more. It’s about doing what makes you happy and claiming your own place in the world. It’s pretty great and I recommend you read it with utmost speed. It’s good and ridiculously cute.

Sharing comics with my daughter

My daughter, Zuri, turned three this year and after extended periods of trying to push comics into our nightly reading with minimal success, this year has turned into our year of reading comics together. It’s been really amazing.

It started when I started writing My Little Pony. She knows the characters and started picking up my comp copies from around the house. She would flip through them, tell me who the characters were, and toss them aside. Eventually, she started asking me what they said. We had read a couple of issues a few times over before we had our next breakthrough.

Lumberjanes or as Zuri calls it “Lumber Jeans”. I assume those are some sort of wooden pants. Anyway, Lumberjanes has been an amazing story through the last year and I am thrilled to know it’s going to keep going. My daughter doesn’t remember anybody’s names, but she is hardcore into that book. We have reread all of the issues multiple times. I thought this was as good as it could get. 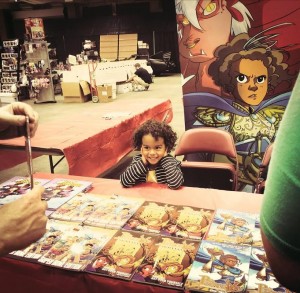 Until I bought her “Smile” from Raina Telgemeier. For those who don’t know, Smile is a story all about one girl’s dental related disasters and drama. It’s really good and my daughter could not get enough of it. She has difficulty maintaining attention for most single issues, but in this comic we would finish a chapter and she would beg to read the next one. It’s really good.

And since reading with my daughter has been such a huge part of the last year, I will recommend a few more books that are great to read with the young ones in your life: Ms. Marvel, Fraction’s FF, Cleopatra in Space, Silver Surfer (no, really), Sensation Comics, Captain Marvel, Zita the Space Girl, My Little Pony, Cursed Pirate Girl, Powerpuff Girls, Gronk, Molly Danger, Vamplets, Skyward, and of course Princeless.

To all of the Talking Comics crew and fans, Happy Holidays and lets home that next year has just as many amazing comics to discover as this year has.