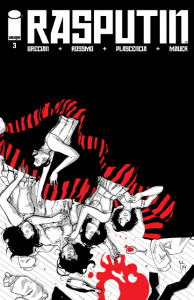 Rasputin came screaming out of nowhere two months ago. The first issue made my head explode, but I decided to put off reviewing it because I wanted to give the series some time to develop. Before I get any further, let me telegraph the lead: favorite new comic of the year.

The series starts out with Rasputin — the mad monk of Russian history/lore — as an old(er) man surrounded by his five best friends who, we are told, will murder him. The story takes us back to Rasputin’s childhood in rural 1870s Russia. We meet his father (abusive hulk), his mother, and a bear. In a number of very moving sequences, Rasputin learns early on that he can revive those recently dead. The second issue brings us Rasputin as a young adult. During a bar fight he meets and befriends a French soldier and is invited to travel with his unit — if you know anything about Rasputin (and even if you don’t) this is the first step away from his village and towards an illustrious (or infamous) future.

The series is founded on a supernatural premise (the cover says it is based on “true-ish events” and Rasputin was believed to be a powerful mystic), but in these first two issues the level of overt non-normal was akin to early X-files (or X-файлы). The third issue ratchets things up a bit when Rasputin takes a naked wander into the Russian winter and encounters figures out of Russian folklore from whom he learns a thing or two and with whom he makes a bargain. Meanwhile, his French friend is being grilled at by a group of … well, let’s just say that the X-files analogy was especially apt: not only does weirdness abound, but conspiracy theories go with Rasputin like gob goes with smacked.

The folklore sequence, in which Rasputin encounter’s some quintessentially Russian spirits, is extraordinary for a number of reasons, all of them exemplifying the virtues of this book as a whole. First of all, it was entirely unfamiliar to me. I am a history guy. My favorite podcast (I’m sorry, SECOND favorite) is Dan Carlin’s Hardcore History. I know something about Russian history. But these Russian folkloric figures had a sense about them that was very foreign and intriguing. So different from the Germanic folklore that’s getting a new (darker grittier) gloss from Grimm, Maleficent, and others. It had an inherent strangeness (exotica) aside from its role in a supernatural comic book.

The second extraordinary thing was the integration of the writing and art into one thing: storytelling. In  a number of places in the series — the folklore sequence, issue two’s bar fight, and the bear fight in issue one — were told largely through silent sequences that were staggeringly beautiful and very effective. The movement of the characters, the sequence of action, the sequence of emotion, all of it was poignantly clear throughout. The sort of thing where you catch yourself after two pages because you stopped breathing. I know there’s been some talk about this on the podcast and in the forum … are you getting your money’s worth if you can buzz through a comic in five minutes because it don’t have da words. First of all, if you’re thinking that way, you are wrong. Secondly, there’s no rule that says you can’t look at the art for an extended time. Maybe the art is there for more than utility? Maybe it serves a function beyond telling the story? Maybe it’s beautiful? Try it. People look at art for whole minutes at a time and report getting something of value from it.

Verdict: Rasputin is beautiful, and great storytelling. Both the silent sequences and the chatty sequences are worth every penny. The character of Rasputin is fascinating (as he was in history), and the art and story are top notch. There’s something different here and I want more.