While most folks are out there celebrating the current Christmas season in traditional ways, such as shopping, partying with friends, opening white-elephant gifts with co-workers, and baking cookies, I’m just sitting here lamenting the end of one of my favorite horror comics of the year: ComixTribe’s And Then Emily Was Gone. Written by Scottish comics writer John Lees and illustrated by Scottish comics artist Iain Laurie, And Then Emily Was Gone is the story of a teenage girl and an ex-police investigator (who sees horrible, grimy, grotesque monsters and creatures that others can’t) who embark on journey to find a missing girl on the Scottish island of Merksay. The last issue of the miniseries hit stores on 12/17/2014 and not even the promise of St. Nick’s visit, here in a few days, is enough to console me. 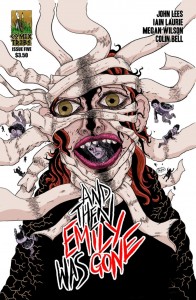 And Then Emily Was Gone is comic that weaves together the lives of a man who sees monsters, a girl with an uncertain destiny, a murderer for hire, and a family man with creatures in the back of his head, but the real stars of the book are the creatures of Scotland folklore (specifically Bonnie Shaw) and the locals of Merksay Island. Artist Iain Laurie draws each character and creature in a beautifully raw and grotesque (yet cartoony) fashion that pulls at your brain through your eyeballs. Evil is drawn into each crease, crevice, and wrinkle of disgusting human and monster flesh alike.

Pair Laurie’s straightforward-yet-intricately-expressed artwork with writer Lees’ compelling narrative and perfect pace and you get a book that feels exciting, new, refreshing, and utterly horrifying. Colorist Megan Wilson adds layers of atmosphere and tone to each issue, helping to spring to life all of the characters’ anxieties, fears, nightmares, and pains.

And Then Emily Was Gone #5 concludes the adventure that the main characters, Greg and Fiona, set out on in issue #1. Some questions are answered, but there are a ton more left dangling. There was a decent amount of buzz around this book, so I’m hoping sales will warrant a sequel. I asked John Lees over Twitter what was next, and he sent me a link to the Free Comic Book Day 2015’s And Then Emily Was Gone #0 solicitation — it’s a prequel to the miniseries, which is cool, but a sequel is definitely in order. This last issue does not tell the end of the story, it only tells the end of a story.

The overall feeling of And Then Emily Was Gone #5, and the miniseries as a whole, is one of hope weighted down by loss and evil. John Lees, Iain Laurie, Megan Wilson, and letterer Colin Bell mashup childhood fears (boogie men, kidnapping) and adult fears (insanity, murder, superstition, conspiracy) in way that recalls the films of David Cronenberg (Videodrome, Scanners, the Fly) and John Carpenter (The Thing, They Live, In The Mouth of Madness), along with the works of David Lynch and Stephen King.

And Then Emily was #5 (and the entire miniseries) is a fun stroll through a demented land full of horrors, both human and supernatural. And Then Emily Was Gone was incredibly fun to collect each month, but reads much better in one sitting, so if you missed the single issues, keep a look out for the trade from ComixTribe, surely coming soon. Oh, and if you’re browsing through the Free Comic Book Day comics on 4/1/2015 and you see that awesomely creepy cover (drawn by Ryan Stegman) of And Then Emily Was Gone #0…pick it up and give it a try.