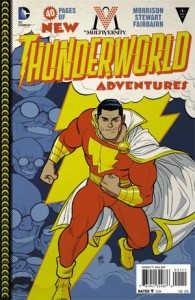 A few months ago when I pondered the question. “How do you solve the Shazam problem?” I was not expecting to be answered so quickly, so thoroughly, and so wonderfully. In this, the fifth issue of Grant Morrison’s Multiversity … saga? anthology? mini-series? … Morrison once again somehow manages to perfectly capture what’s best or most intriguing about a particular corner of the DC Universe, in this case the Captain Marvel Family of Earth-5. Morrison, with artist Cameron Stewart and colorist Nathan Fairbairn evoke the look, feel, inventiveness, and enthusiasm of C.C. Beck’s original Captain Marvel.

The story begins at the Rock of Eternity, where the Wizard is monologuing portentiously. Out of the ether comes a techno-industrial replica of the Rock, piloted by Dr. Sivana and his brood. It seems he’s inserted an eighth day into the cosmic calendar, and is using his science-Rock of E to destroy the magic-Rock of E and create the day of his dreams, i.e., the day Captain Marvel dies!

There’s been a buzz about this book for months, and I — as a lifelong fan of the Big Red — have been buzzing right along with it. And oh the buzz paid off! Morrison, Stewart, and Fairbairn got so much right in Thunderworld. The smile of Mary and Junior as they fly into the scene. Cap’s Fred MacMurray hair cut and squinty eyes (because squinty-eyed heroes are the best). The Lieutenant Marvels! The Sivana Legion! There is a sort of everything and the kitchen sink vibe going on, and hurrah for that!

The art has a “cartoony” line (Stewart’s own word) that references Beck without aping it. And the colors are extraordinary, even to the extent of the stippling on the Train to Eternity exactly bringing to mind Whiz Comics #2. Thunderworld is reminiscent of Jeff Smith’s Shazam! The Monster Society of Evil from 2009, and — like Alex Ross’s in Justice — makes the right decisions in Cap’s characterization. Too many of the recent takes on the character have played up the 12-year-old-in-a-grown-man’s-body angle, which is only charming if you forget that — as every middle school teacher knows — 12 year olds are sociopaths. Morrison writes Cap the way he should be, a Good Guy who does the right thing, and from whom is never heard a discouraging word. He is not over-earnest and self-righteous, but he is also not dark, cynical, world weary, or ironic.

Verdict: Buy it! Buzz is already developing around a two issue Shazam story in DC’s Convergence event. Holy moly, we could use more like this.