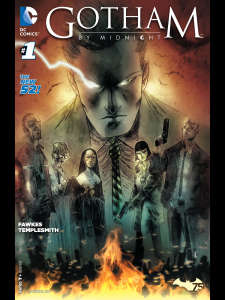 A new series has one of the most difficult jobs: they must grab the reader, while establishing the world and the characters. In a comic book, especially one that is twenty-two pages long, it is near impossible. While it becomes a little campy and a bit exposition heavy at times, Gotham by Midnight excels in many areas needed to succeed as a new series.

Gotham is one of the most provocative and interesting cities created in fiction. Speak the name of Gotham and a majority of people will know what you are talking about and who protects that city. While the setting is familiar, the premise of this story is that it means to take you out of the city itself and into the spaces between spaces. While Batman is busting his knuckles against thugs skulls, investigating in Gotham proper, the Midnight Shift are diving into places no one else does—not even the Bat himself. While the issue does clearly take part in Gotham, it isn’t as realized by the art from Templesmith.

Templesmith’s art is a scratchy mess and is often character central. While he is fairly consistent with his characters, the lines are loose and get a bit wild in smaller details such as distance. While this is not necessarily a bad thing, as he does set the mood well with colors and direction, is just not my personal taste. The writing wasn’t quite what I was expecting. While the plot and specific case we are opened up upon is interesting and the characters are decently complex, the dialogue and narrative seem to be doing just as the members of the Midnight Shift are doing within the opening opening panels: begging for validation. There is a bit of a camp to the dialogue that is a bit off-putting at first, but it levels out when the story takes a more serious turn. Thankfully, this only lasts a short while, as when the actual case begins, investigations are made, the book soars into great heights of tension and an overall understanding of horror.

Fawkes is able to work a character in a matter of panels and talk you into believing in them, that they are who they are, and when he flips that on it’s head, when they are forced to start acting out of character—because their resolve or central belief system has been shaken—that is terrific terror. I believed that characters were afraid and I understood why some were not. While Jim Corrigan is the familiar face here, he is not centralized in that it is all his own show. The crew gets their moments and while it’s still a mystery as to all of their intricacies and complexities, we are given a good idea of who they are.

Go ahead, buy it.

Gotham by Midnight #1, in my opinion, is not quite as explosive of a start as, say, Gotham Academy #1 or Batgirl #35, but it is a solid start that any comic book creator would want, and hopefully, it is just enough for it to stay around and open up room for more books like it.