“Over a hundred wonderful and terrifying creatures have suddenly appeared on earth. Two teens investigate the origins of these curious creatures and how they can stop those who are trying to destroy them.” 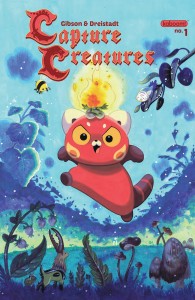 Capture Creatures #1, from KaBOOM!, is a beautiful comic book, suitable for all ages, but (seemingly) aimed at children. The art is simple yet dynamic, the colors are deep and harmonious, and the writing is layered yet straightforward. The 30 pages of story is uninterrupted by ads, and the paper is heavy and glossy. Cover price is $3.99, with several gorgeous covers to choose from.

Capture Creatures is the story of a young, outgoing, tom-boyish girl named Tamzen and her book-smart friend, Jory. Together, they explore and investigate the dangerous New Reclamation Zone and a mysterious island. In this first issue, the main characters are introduced, which not only includes Tamzen and Jory, but a bumbling “park ranger” named Teddy, Tamzen’s scientist father, and a goofy, older teenage boy who works in the same lab as Tamzen’s father and Jory. Near the end of this issue is where we see the first appearance of one of this universe’s pocket monsters. She/he is a cute little thing, wild and slightly vicious!

There are a lot of teenagers, young adults, and even 30-somethings who grew up on Pokemon and are still excited by the idea of powerful, evolving, wild creatures and their relationships with humans. In this series, there’s a lot of potential to reach that older audience, if Gibson elevates the dialogue a bit. Some of his dialogue in Capture Creatures #1 felt clunky — almost like a poorly dubbed anime. I think kids, especially kids who read comics, are smart enough to process more sophisticated dialogue when its combined with visuals.

Give it a shot. Capture Creatures #1, from the creative minds of Becky Dreistadt and Frank Gibson, feels like a work of passion. I’m looking forward to issue #2, where I think the real fun and adventure will begin. 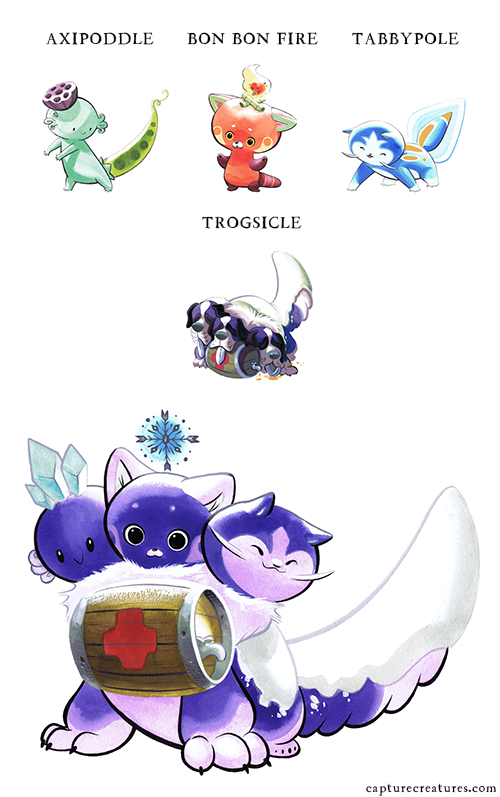