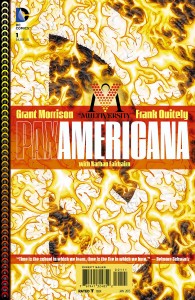 It wasn’t obvious to me that Pax Americana is a “take” on Alan Moore’s and Dave Gibbon’s Watchmen until at least the fifth panel of the first page. I saw the window-pane page layout (eight panels). I saw the progression of action in tiny increments of time, zooming in cinematically closer, closer, and then closer. I saw the corpse’s hand, and the drop of blood bleeding onto the field of a prominently round thing (here, the presidential seal, in Watchmen the smiley face). This wasn’t a subtle pastiche, or an obvious if loving homage. This was declaration of intentions. Morrison and Quitely were going to reckon with Moore and Gibbon’s famously dark repudiation of the super hero milieu. They would deconstruct the deconstruction, or maybe construct it? Reconstruct? Hard to say.

Pax Americana tells the story of “Earth-4,” the Earth of the Charlton Comics heroes — Blue Beetle, the Question, Nightshade, the Peacemaker, Captain Atom — acquired by DC Comics in the ’70s. The tale starts with the assassination of the president, but told in reverse frames (one of Quitely’s genuinely breathtaking sequences). The murder, it turns out, is being watched in reverse on a Zapruder-like film, a hint to the structure of the story as a whole. But this is no mystery tale. It is revealed early that Peacemaker has murdered the president. One question is “Why?” The other is, “How’d we come to this?” Eventually, there is some time-travel tomfoolery, the Question and Blue Beetle reveal themselves to be a winning comedy team, and Captain Atom sheds a tear. This is good stuff.

Let me fill in some back story. The Charlton heroes were originally intended to be the subjects of Alan Moore’s Watchmen series, but DC wouldn’t let him have his way with the Blue Beetle et al., so Moore created his own proxies for Our Heroes. (Blue Beetle, for example, is rendered by Moore as Night Owl. Captain Atom as Dr. Manhattan. The Question as Rorschach. Etc.) Morrison and Quitely, in turn, take the Charlton heroes and place them into a world of the Watchmen aesthetic, reflecting the analogy back on itself. It’s one of Morrison’s Multiversity Maxims that not just heroes and plots divide the many crisis prone Earths. The Earths are also divided by style, aesthetic, and trope. Why would Gardner Fox’s Earth-2 and Earth-3, for example, be any more valid as alternate universes than Captain Carrot, or the the celebrity mag Earth-ME, or the Watchmen style world of this issue? “Because they are canon,” you may argue. But in the multiverse, there is no canon. There is no need for canon. In the multiverse, canon is for weaklings.

I’m being glib. Morrison invites us to be. But Pax Americana is a great story. Raymond Chandler levels of plot complexity. Extraordinarily interesting heroes (these are not merely B-listers), especially the Question (Vic Sage) who is criminally underused by DC (when will he appear on Arrow, CW?), and is always the most fascinating thing on the page.

And the art. I am not exaggerating. Quitely and Fairbairn have used all of their powers here, and will leave you gasping. Quitely, who has already given us one timeless work with All-Star Superman, has outdone himself — and everyone else — with this virtuosic tour de force of layout and line. It is matched by Morrison’s contributions. At one point the Question let’s us in on his theory of colors (“purple … equivalent to magical thinking”). These theories seem to tie into the colors as rendered by Nathan Fairbairn. Maybe they don’t (the Question is very convincing on his conspiracy theories), but there is a cohesion to the colors working with the words and art that justifies Fairbairn’s special credit on the cover.

Verdict: Sometimes I think these comics are written just for me. Morrison and Quitely’s stylized fascinations are exactly the kind of thing that toasts my marshmallows. There is the question, raised by some reviewers: if you aren’t familiar with the Watchmen will you have any idea what’s going on? I’m not sure. I think it’s a great comic in its own right — certainly the script and layout are wonderous — but I am enamored with Pax Americana as a “response” to the Watchmen. Yes, buy it! Read it. Then read it again. If you still don’t get it, read it again. It’s worth it.