Spinning out of the pages of Valiant’s Shadowman series is Punk Mambo #0. Like most of the other zero issues that Valiant has put out, Punk Mambo looks at the early history of the character and how it ties into any current or upcoming story lines in the Valiant universe. 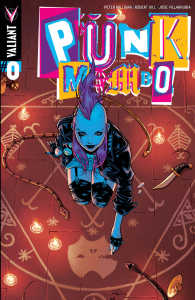 I’ll be perfectly honest and admit that I have not been the biggest fan of Shadowman. I thought Milligan’s run on the book was decent, but it felt constrained by the preceding issues and story arc. In Punk Mambo Milligan is freer to explore the character. It is a welcomed breath of fresh air in this corner of Valiant’s world. In just one issue Milligan thoroughly explores Punk Mambo, and we get to see growth of the character through several stages and transitions in her life. The book opens up in the present day, and finishes a few weeks later. Even in that short period of time we get to experience change in Punk’s outlook and approach. However, she is always the epitome of badass, and a master of the dark arts. She is a frightening character with a like-able demeanor that I cannot wait to see more of her.

Robert Gill also steps up and does a great job with the art. He is able to capture the eeriness of voodoo magic, and blend it with the grit and grime of the underground punk scene in London. Punk and voodoo are not two things that you would think go together well, but Gill’s art and Villarrubia’s colors convince us that they are peas in a pod.

The issue is a really fun one-shot that is accessible to anyone. The book ends a little open ended and hints that there is more to come. Valiant has not revealed anything about the future of Punk Mamo, but there is every indication that there will be more of her. I mean, they just gave a minor character her own one-shot title. This wasn’t Shadowman: Punk Mambo. It was Punk Mambo just. It should be interesting to see where this character heads in the future, as she brings new dimension and growth to the already growing contingent of strong female characters in the Valiant universe.

Buy! If you have been enjoying Sabrina or Wytches, then you should give Punk Mambo #0 a look. New readers should feel perfectly comfortable picking up the book as there is nothing in the issue that requires any knowledge of other Valiant titles. Older readers should also give it a look. Milligan is given much more room to work and creates something spectacular.

If you enjoyed Punk Mambo #0 be sure to listen to the Talking Valiant podcast. Our next episode should be dropping on December 2nd, and will feature an interview with artist Robert Gill.