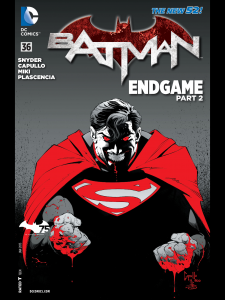 *WARNING* If you have not read Batman #35 yet, do not read this review. I repeat: this review will spoil Batman #35 for you, and truly, that would be a shame. Go check out my review for #35 here and BUY THE BOOK!

Seriously. This is your last warning. Spoilers for #35 to follow. If you are oddly into being spoiled or are caught up on #35, click the “Batman #36 Review” below to dive into the review proper.

Batman vs. Superman. Bruce vs. Clark. The Dark Knight vs. The Man of Steel. Who wins in a fight? The answer, apparently, is always the same.

It’s happened before, it’s happening again, it’s going to show up on the big screen! Everyone loves to make Bruce and Clark punch each other. I’ve seen fights—rather, arguments—erupt from a discussion of who would win between the two iconic superheroes. Would Supe’s overall scope of power and strength be too much for the Bat? Or would his golden boy attitude be his downfall, allowing Bat’s to use his honor against him?

Scott Snyder and Greg Capullo finally answer this question and it is glorious to behold.

When I had finished issue #35, I could not believe how excited I was or even that I felt a little out of breath. I could feel that thrilling rise in my stomach, the one that drives you to dance spastically and scream nonsense.

The end comes to all. We all have a fear of death, or, at least, speaking for myself, I do. And I would argue most fall under that assumption. Most discussions are of drowning or burning to death—the actual pain involved; most pray there isn’t. Batman only fears one thing. The sound.

He’s back and in a big way.

The Joker, the last time we saw him, was bursting at the seems and was full of metaphor and, what he considers, comedy. He was making a point. Proving he and the Bat’s are destined to do what they do forever. That they need each other. That they were made for each other. The Joker worked tirelessly to present a dazzling meal and entertainment for the Bat’s—and what did he receive? Rejection.

The scope of what the Joker means to do is terrifying and truly—him. And once again, Scott Snyder proves his prowess as not only a writer but a grand storyteller by revealing truth he sewed into the plot months ago. It’s dazzling and head shaking. Let’s just say, there is a lot that Snyder is going to have to explain for me to let this slide. Truth be told, I can’t wait to hear the explanation.

Greg Capullo’s art is stellar as always. I love his take on Batman. It is by far my favorite interpretation. I love the hyperrealism that melds with a more comic—think Batman: The Animated Series—aesthetic. Speaking of aesthetic, this book would be far cry from the quality it is without the incredibly moody and gorgeous colors done by FCO Plascencia. His depiction of filth is even beautiful.

I hope you are reading this after you have bought the book—that’s how much I think you should buy it. BUY! Scott Snyder and company are diving head first into the most bombastic and fun, ergo creepy in it’s own right, that Batman has seen since the New 52 launched! You are not going to want to miss this!

James Tynion IV continues his back up story at the end of this issue, but I will not give any information on it, as it spoils a bit of the issue proper before it. Just know that James Tynion IV is killing it with these side characters and setting the overall mood of the ground level action. In equal quality to the issue at large.[/toggler]