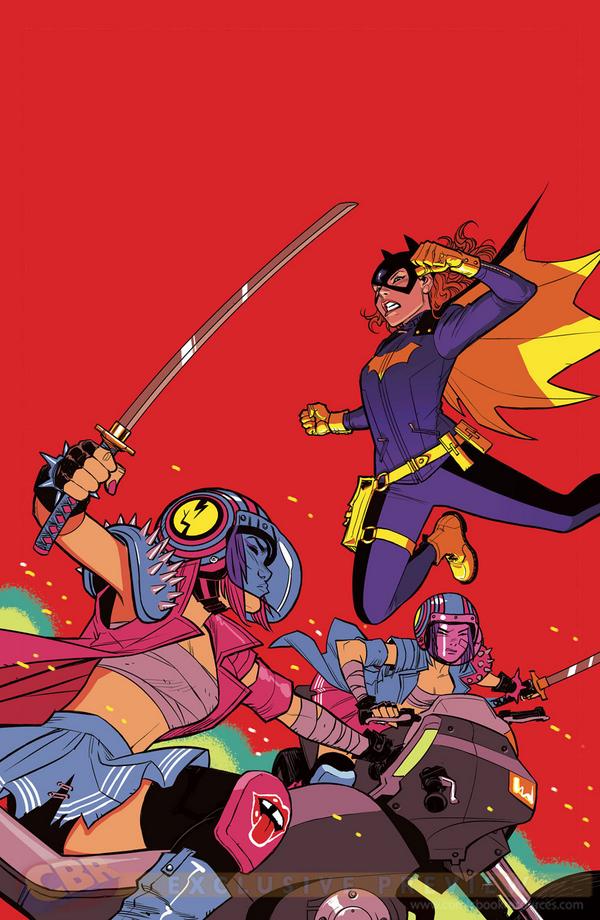 After last month’s stellar debut, the new creative team for Batgirl continues to bring on the fun in issue 36.  Barbara has got a load of issues to deal with, from accidentally ruining Dinah’s life to losing all of her thesis data.  She has no time for delusional twins who love reenacting scenes from an old anime.

That’s right.  Twins in over-the-top outfits causing a ruckus around Gotham.  And, you know what, it works.  The vibe emanating from the series is perfect for outrageous stories you do not typically see in the New 52.

More on that in a minute.  Let’s back up to the beginning of this issue.

Dinah is still harboring a grudge against Barbara for destroying all of her belongings.  Can you blame her?  Not only is she left with nothing, she remains in close proximity to the source of her problem by crashing on Babs’ couch.  This friction is great – Stewart and Fletcher are setting these two up for a major team-up that reconciles their friendship.  Or, I hope that’s the end game.  Regardless, Dinah is a major thorn in Barbara’s side.  No matter how much she apologizes, nothing will satisfy.  On top of that, Babs is paying.  Big time.

But Dinah is just the beginning of Barbara’s problems.  With the loss of her data and the revelation that somebody knows her heroic identity, the world looks like it is crashing around Barbara.  Enter the crazy biker twins living the anime dream.  It’s up to Batgirl to find a way to put a stop to their destructive – and deadly – shenanigans.

There are a ton of great things going on in this issue.  Barbara is shown as the incredibly smart young woman she is.  She impresses everyone she encounters when she starts her graduate program.  She is quick thinking, and her incredible memory once again saves the day.  The supporting cast in the story is great, especially the introduction of Barbara’s research assistant, Nadimah.  I want to know more about her and her personal research.  Nothing-but-trouble Jeremy is just the type of trouble Babs needs in her life.  And Frankie continues to be the roommate of my dreams: way cooler than me, but willing to instruct me in the ways of the hipster.

Finally, the art and attitude of the issue is great.  Babs Tarr is KILLING IT with the action sequences and building the world around Barbara.  Gotham never looked so awesome.  Between Tarr’s fun approach to the character and Stewart and Fletcher’s use of popular culture to tell a compelling story, Batgirl is one of the superheroine books to pick up this year.

Buy!  Even if you haven’t picked up 35 (what’s wrong with you?), you can still catch the majority of the overarching story with just this issue.  Plus, it’s fun!  Isn’t that what comics are supposed to be?