A mystery is afoot; and I don’t just mean how a title like Gotham Academy has surprisingly made its way out of the offices of DC Comics and onto the stands.  No, this mystery takes place within the pages of the story itself, and looks to redefine the scope of DC’s creative boundaries through its approach.  And just what is this mystery you may ask?  “Well”, I would glibly reply, “that’s part of the mystery!”  But can intrigue and ambiance combine to form a story able to keep readers interested?  Lets find out as we take a look at Fletcher, Cloonan, and Kerschl’s second issue inside the halls of Gotham Academy #2. 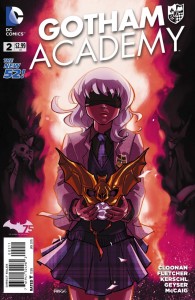 Olive Silverlock, still reeling from the hinted-at incident that marred her summer break, finds herself teamed up with rival classmate Pomeline on a history report covering turn-of-the-century era Millie Cobblepot.  Their research finds more than just bullet points though, as a hidden map of the school grounds leads Pomeline off to search the campus on her own.  Meanwhile, as the energetic Maps is searching for clues regarding the ‘monster’ that haunts their dormitory, both she and Olive catch sight of mysterious cloaked figures running for the Cobblepot mausoleum nearby.  Will they find the answer to the ghosts that haunt the campus?  Or will Olive find herself pulled even deeper into a world that just may be threatening her sanity?  (And most importantly, where do Olive and Maps find their amazing clothing and decor?!)

Gotham Academy is practically the definition of a risk-taking title from the Big 2.  Focusing on brand new characters, carving out its own unique setting for a corner of the DCU, and approaching its story with a slow and steady pace of a building mystery; it is no surprise to me that it has met mixed reactions from the public with its two issues to date.  Piled with mounds of intrigue already, it’s hard to tell which items are important to the main story, which are red herrings, and if there is any correlation between all of the strange things that have centered around Olive Silverlock.  But unlike how disjointed and messy that may sound, Gotham Academy is absolutely glorious for those very reasons.  Instead of breaking out the pieces of the story into the necessary parts of any introductory arc (exposition here, backstory there, supporting cast intros here), when presented in this manner the reader is able pick up these components contextually while it simultaneously advances the ambiance of secrets and mystery that swirl around this title.

That being said, there is a huge amount of trust the reader will need to put into the creative team for this type of storytelling.  After shows such as Lost demonstrated how successful a tale told in this manner can be in the modern day, it also became a poster-child for how damaging signs of meandering without a clear story to tell can be to the overall experience.  Luckily, Gotham Academy (though admittedly with little to judge after only 2 issues) has been demonstrating clear signs of a plan in action, and has populated its cast with characters that step beyond their archetypes easily.  This character development and interaction will be the true metric on whether Gotham Academy can succeed or fail in this storytelling method, and thus far with students and staff alike it appears to be off to a good start.

The artwork also separates this title from its contemporary brothers and sisters in the DC Comics line.  Cartoony with clear signs of manga influence, the level of dark tones and ridiculous detail in the settings surprisingly works in tandem instead of contradicting each other.  It’s an odd blend to be certain, but I find it quite adept at bringing small items in the background that affect the story to the forefront through this mishmash of style, and as has been shown thus far, it is a skill that can be put to good use in this type of story..  The characters themselves are expressive and unique; each running the gamut of sad, angry, and the unparalleled levels of hyperactive joy that is Maps through their facial expressions alone.  As I stated before, the growth of these characters over the course of the series will be extremely important overall, so knowing that they will be depicted with such clarity is a very good thing.

Buy.  In my opinion, Gotham Academy is showing a rarely used angle of the Big 2, and looks to have a wealth of items from the DCU at large to play with in their setting.  The characters are fun without being caricatures, and the mysteries presented should slowly pull the reader deeply into this world.  Trust will be needed from the reader though, as this is a slow burn that uses its tone and lack of information to build the world around it.