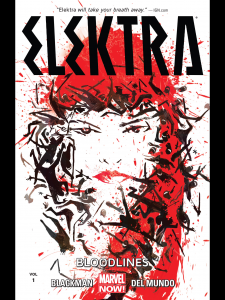 Elektra is one of those characters that, when you hear her name, most think of two things: either, “Oh, that’s Daredevil’s girl.” Or “Yeah, Jennifer Garner.”

Whether within the pages of Daredevil or being a second-rate movie, the character has never been her own, nor has she been respected as her own.

Now, she’s done with that. She’s decided to be what she identifies most with: someone’s assassin.

It is a rare moment when you realize that an art team and writer belong together. It’s those moments when the words you read on the page reflect the tone of the art beneath them. When we think of what we want from writers taking over books, we mostly want the writer to understand and know the character in question. If I’m picking up Daredevil—I want Mark Waid to know Matt Murdock through and through. What we don’t talk about enough is how important it is that an artist understands and knows the character. W. Haden Blackman & Mike Del Mundo know Elektra. There is no other way to describe the perfect synchronization of art and prose.

The book opens up with Elektra discussing her identity as a person, beginning with her parents and ending with the events of her life, leading her to be who she is today. She talks about how she has always been someone else’s something, whether that be daughter, victim or lover. She speaks of dreams and how they shatter. She speaks of heroism and how she is not a hero. She is and will always be…someone’s assassin. All of this is set onto of a backdrop of our protagonist running through a crimson ribbon dance ending where the prose ends, beautifully merging the grace and gore together to give us a complex and impressive character. The art and narration weave in and out of each other just as the character dances. It’s gorgeous and haunting.

Elektra, taking her life into her own hands seeks out a much older than she looks Matchmaker to receive a contract. When she takes a contract to end all contracts, she takes steps down a narrow road of blood and horror. While she is pursuing the man named Cape Crow who was a contract thief in the assassin’s guild years before, she is not alone. She meets up with some familiar faces and one who’s face is aesthetically simple but truly horrifying. An Australian legend named Bloody Lips who not only kills his victims but will eat them to gain their strengths and memories and skills. The depictions of this enemy are not only terrifying, but the character is developed by the writer and thus allowing the reader to either develop sympathy or further disgust for him. The character design of him is wonderful. He steals every scene he is in.

Oftentimes, comic books, especially about superheroes, can become confusing on how things happen or even what is happening. The worst crime for me is when I am reading a book and the build to the climax takes up the majority of the pages and the final battle or confrontation is over in a matter of panels. Thankfully, you will not find that here. The entire book is wonderfully cinematic and it keeps your heart pumping all the way to the end. The final confrontation is both terrifying and wonderfully satisfying. You understand the characters in the battle. You know them and that connection makes everything about what happens all the more poignant. Not to mention, there is a two page spread of some of the most horrifying and emotionally taxing art I have ever seen. If I wasn’t afraid of spoilers, the rest of this article would be spent discussing the nuances and subtleties of the art and narration on this page. It is possibly one of the best two page spreads I have ever seen—and that’s being said even though a majority of it disgusts me.

Buy this book. Buy it. Now. Don’t argue. Just do it. Elektra Vol. 1 is an incredible feat of fiction. The art from Mike Del Mundo is worth the ticket price alone, but that said, so is the story and presentation given by W. Haden Blackman. The perfect blend of character and story, art and prose is an achievement I hope Marvel continues to pursue. This is one of the best books on the stands, and I didn’t even know it. Now I do, and so, as I hope, do you.