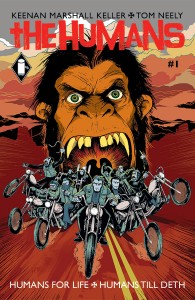 Back cover pin-up by Benjamin Marra

I didn’t know anything about The Humans when I decided to take the review. When I picked up the issue, I was very much surprised to see monkeys with kuttes or cut offs, using obscene hand gestures.

And even when I wrapped my head around this idea, I still found myself struggling with the book.

The art is interesting, reminiscent of years past with intriguing pastel colors and an almost Scooby-Doo anatomy structure. But, unlike Scooby, this book disgusts me…

That’s where my struggling with reviewing this book begins. The art style, the actions of the characters within the book…it all makes me feel gross. Just grotesquely grimy.

The issue opens up with a funeral and it is treated with familiar stereotypical biker fashion by mixing emotional toughness and cultish symbolism. When traditional funeral procession ends, so follows that which repulses me. There is an air of misogyny within the book and a revolting moment that visually (as well as using sound bubbles) sets the misogyny in stone.

The story only introduces you to a few of the monkeys and takes you through a weird and cultish funeral procession. Some history is spoken of but nothing for moving forward with any kind of plot. We don’t learn anything about characters, other than one loves taking his clothes off, but being a comic book, I’m sure character development will come.

There are a few pages that delve into a very different way of presenting action and story through panel design, but it all seemed to work to hard to convince the reader that the fight on the page was far more epic and important than it ultimately is. Though the presentation is interesting, the end result is not.

Skip it. This book may turn around as far as storytelling and overall character progression and exploration, but as it stands, it is an empty story with nauseating characters doing abhorrent things. I do ask that you understand my opinion on the actions of these characters is my own and may not fall under what you consider repulsive. Though I would usually look past it, this was just too loud for me to ignore as it affected my overall reading of the book in the beginning. Even after ignoring it through the second and third reading, I found the faults of the book are more than just that which detest me.