Story and Art by Mihara Gunya 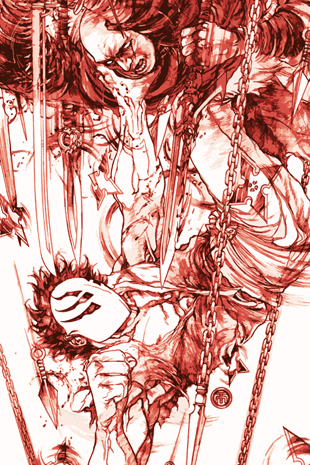 Welcome back to another Manga Monday! After last weekend’s Extra Life challenge, I’m happy to be back to a more normal schedule that includes reading some awesome manga. This week, I’m happy to introduce all of you to Kamen from GEN Manga.

Mihara Gunya’s fantasy indie manga series follows a strange man who wakes up in the middle of a field with an ominous mask attached to his face in ancient Japan. He cannot take it off, and he cannot communicate of his own free will. The mask whispers to him, revealing various observations and survival tips. The man has little agency; he is practically at the mercy of the mask.

Though we do not know what the man is thinking, readers get a sense of the man’s character. The mask acts out of survival; the man acts out of compassion. Given a choice between risking his life and saving another, he chooses to protect those who need him most. There are hints sprinkled throughout that the man is inexperienced with the world. He has a strong, intimidating body, yet he possesses a much more naïve and youthful view on things. Trying to tease the man apart from the mask is half the fun of Kamen.

Kamen couldn’t survive with just the title character. Because of his lack of verbal interaction with his world, Gunya has to build the world around him with a great supporting cast. Simba is a female general who fights for what she believes is right, even if it means political suicide. She quickly becomes a key character to follow within the story. The recently published second volume concentrates more on Simba and the battle she wages against the Zoraiden army and their barbaric ways. During his journey, the masked man saves the life of a girl. The girl, who is also silent, has an unknown source of power within her.

Kamen features bloody battles mixed with mysterious fantasy elements. Samurai fighting and all-out war are heavily used throughout the first two volumes. Gunya keeps everything easy to follow by using sharp, clean lines and panel layouts for the story. Characters are easy to distinguish from each other, and the action is dynamic and fluid.

The first two volumes of Kamen are available to English-speaking audiences from GEN Manga.

Planet Spaceball – A Nerd Girl’s Guide to the Universe