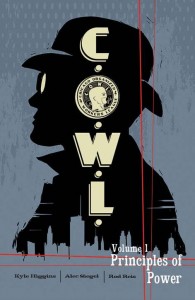 Chicago is quiet, the moon settling in the sky, the windy city taking a deep breath as if to rest.

The side of a building explodes and a messy fight begins that introduces the reader to no one and yet is written as if you have always known the contestants.

Let’s say comic books were human. How would they translate? How old would they be? What would their character be like? Detective Comics would probably be an angry forty-year-old man with a vendetta against all crooks. Sex Criminals would probably be a confused man-child person trying to figure life out (like a mash-up of Chip Zdarsky and Matt Fraction—eek!). C.O.W.L. would probably hang out with my wife’s eighty-seven-year-old grandfather who refuses to quit working and would frankly not know what to do with himself if he did.

The book begins explosive, pulling the reader in, showing them something familiar. Superheroes and a Super Villain locked in battle above city streets. The explosively cold intro not only sets the mood but also displays the overall “problem” the protagonists have within the narrative. The Chicago Organized Workers League (C.O.W.L.) was created to stand against a plague of organized crime and a rise of Super-Villains who were near unbeatable. What happens when those things are beaten and the city becomes disillusioned with such heroism?

And now imagine Captain America in a union. Yeah, “Oh, the horror!”, right?

Say Marvel’s Civil War actually meant something. Say heroes really did become employees of the government—what would that look like? It would probably look a bit like C.O.W.L. with all its grit and grime and scandal. Which brings us to the aesthetic of the book.

Rod Reis has a wonderful style that mixes a hyper-realistic disposition as well as sharp lines reminiscent of The Incredible’s (and I’m a sucker for that kind of art). It’s messy, it’s vibrant, it’s dark and it sets the mood immediately. Something is going down and it’s going to get messy. Unfortunately, though much of the art is gorgeous, it can get hard to follow, which brings me to the overall problem with the book.

A slow burn barely describes this narrative and I’m not sure any road map could help you keep up with where characters are—that is, if you can remember who characters are in the first place. It’s a crime drama that deals with politics mostly. It feels as if John le Carré were to decide to write a spy novel with superheroes. The overall tonality of the tale is realism jumbled with the idea of bombastic super heroism paid for by the “man”. There is much legal speech and a fair amount of busting heads, but truly, the story mostly meanders, as if it’s looking for where to go. Which, I suppose, is accurate to the characters predicament. Even still, that isn’t the best method of telling a compelling story, which this book, no doubt, has the bare bones of.

The biggest problem I had with this book was the characters, or rather, the lack there of. I read through the entire story three times and not once did any of the characters matter to me. Most of them are despicable or easy to confuse with another and the lone one I like doesn’t get much time on panel. When she does, she has very quick and amazing moments, but even those moments don’t advance what is to become the main line of the plot. Basically, I didn’t like the characters. I didn’t care once if they were to stick around. I was alright with the protagonists losing. That is a problem, especially when the protagonists are superheroes.

Even worse when the entire plot continuing depends on them winning.

It took several times reading through to follow the threads through the book, and I’m still not even sure if I succeeded in doing so. I’m still not sure which moments are important and which are not.

And yet, I liked the book.

See this is where reading comics hits that gray area. You can read something and have problem after problem with it and still enjoy it, somehow, some way. C.O.W.L., all the same, is a very fascinating read and an interesting take on super heroism. The relationship between hero and villain has always engrossed me, as with Batman and the Joker.

What I find most odd about my experience with C.O.W.L. Is that the longer I let it sit and I chew on what is going on in the story, the better I understand it and the better I like it. I still have a hard time feeling compassion for any of the characters who are written as if they have been around as long as Marvel’s first family or earlier. They have histories, but we aren’t really given them. We only know what we are presented and unfortunately, parallel to the overall first volume, isn’t very much at all.

C.O.W.L. is a story about terrible characters doing roughly terrible things in the sixties. It’s noir and grimy and for that, I can give it much praise. You will love the art, even if you don’t understand some of what is going on at times.

It’s difficult to advise you one what to do here. Part of me wants to tell you to skip it, that it isn’t worth your time. Another part of me is telling me that once the second volume of this story is going to blow off the hinges. Once we get some more time with the characters and can begin to better understand some of the mysteries of what is going on throughout the pages, C.O.W.L. Could easily shape up to be one of the best superhero deconstruction stories to date. So, if you like slow burn plots and crime drama that is grit and grime, you should buy this. Image offers such great deals with their $9.99 price tag. If that doesn’t sound interesting, pass. Go get something else. I just think that this book has something within it. I feel in my bones that this book is going to rise and be talked about amongst many comic book fans in the next couple of years. Or maybe it won’t. It’s tough to call.