Hit: Pen & Ink #1, BOOM! Studios’ newest Pen & Ink edition collects the first two issues of Bryce Carlson and Vanesa R. Del Rey’s 1950’s crime-noir mini-series Hit, in an over-sized, black-and-white, prestige format. Del Rey’s artwork is the focus of this edition, enlarged, with colors absent. At the bottom of each page is a running commentary from series writer, Carlson, and the artist herself. Together, they chat about their collaborative styles, learning to work together as writer and artist in creating a single vision, their creative processes, and their artist techniques. 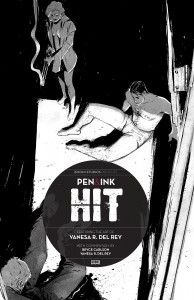 Below is an expert from their discussion about page seven of issue #1.

CARLSON: This is one of my favorite pages in the series, hands down. I remember we didn’t know that you were going to be drawing in sound effects. I think the first time you did was with the big CRACK, and we were like, “Yeah, Vanesa should just have the freedom to draw whatever sound effects she’s excited about.” I love sound effects that bleed out of the panels and become part of the art. They look more organic, and bring a different feel than the regular lettering pieces.

CARLSON: And you loved it, right?

R. DEL REY: Yeah. Another design element, you’ve got to keep in mind where to put it and how to draw it so it fits in the scene.

The majority of the commentary is by Carlson. Through out the 52 pages of Hit: Pen & Ink #1 he continuously praises R. Del Rey and her artist decisions. Unfortunately, fans wanting insight into R. Del Ray’s thought processes and artist technique are left wanting. R. Del Rey does not actively participate in the commentary. She merely responds to Carlson. Her responses to Carlson’s praise and questions are humble and concise, but she does not go into any depth. Carlson, on the other hand, does a good job of explaining the intent of each page and how R. Del Rey either helped realize that intent or improve upon it. His analysis of R. Del Rey’s artistic subtleties is also very good. For example:

CARLSON: Because of how Vanesa articulated Slater’s expressions, you can tell he’s being affected, which is unusual for him and the reader. Especially in the third and fourth panels, the way you worked with is face, you can tell that he’s not as strong and confident…

Check it out! The point of Hit: Pen & Ink #1 is to shine the spotlight on the artist, which it does, by minimizing the commentary to the bottom gutter and letting the art speak for itself. Each page is worthy of study and absorption. For those wanting tips, techniques, and process breakdowns from the artist, you’ll be left wanting more (in a good way!).