Story and Art by Shinobu Ohtaka 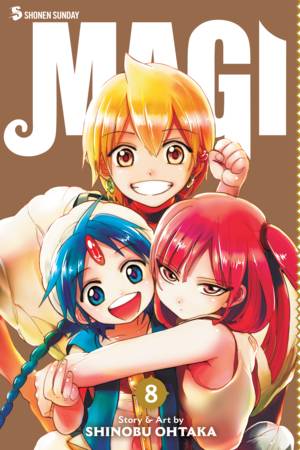 Magi drops readers right into the middle of an intense battle in the eighth volume of Shinobu Ohtaka’s fantasy series. In a world of Djinn, dungeons, and danger, Alibaba, Aladdin, and their friends must navigate their way as they acquire magical items and become more powerful.

The world of Magi is complicated and involved. Set in an alternate, magical version of history, a force of magic called Rukh thrives in human bodies. The actions and emotions of a person determine how the Rukh behaves. If a person turns to darker forces, the Rukh becomes unstable and dangerous. Think of it like the Force – the heart of a person determines the purity of the Rukh.

Dark Rukh is concentrated on Cassim after he injures himself. The injury activates the creation of a Djinn of enormous power that envelops Cassim. Invulnerable and angry, Cassim starts to wreak havoc on those who love him. Alibaba, Cassim’s oldest friend, is left staring at a dark abyss that he cannot handle by himself. It will take the combined efforts of all his allies to reach out to Cassim and save him from his own destructive thoughts.

Volume 8 concentrates on redemption. Cassim has let his soul become darker and darker. We all know that it is useless to compare ourselves to others; for Cassim, that comparison to his friend Alibaba has corrupted him. Cassim uses the argument of nature and nurture to justify his feelings. Though he and Alibaba hailed from the same environment, Alibaba had the genetic advantage of a kind mother and a noble father. On the other hand, Cassim saw his own lineage as trash. Rightly so – Cassim’s difficult life would take a toll on anybody. Alibaba sees the underlying issue to be perception versus reality. He does not feel like the hero Cassim is making him out to be. The intense argument between Cassim and Alibaba brings up many dark feelings for both characters that act as a turning point.

Cassim’s motives stem from a slow-burning inferiority complex. Cassim sees his fate as sealed; he cannot reach the height that he perceives Alibaba is at. There is no winning for either character until they see the world from the other’s perspective. As with any difference between people, taking a step back and viewing the world from another person’s life is the hardest thing to do.

Magi Volume 8 starts out intense, shifts to emotionally poignant, and ends with humor. The fast pace keeps readers on their toes, not exactly sure what to expect from Aladdin, Alibaba, and the gang. Ohtaka’s artwork is crisp, easy to follow, and varies in the perspectives of the panels. The diversity in artwork maintains the freshness of the story while providing the perfect avenue for conveying action sequences.

While volume eight of Magi may not be the best place to start, it is an enjoyable crash course in the series. With a little help from the Internet, any reader can get a solid grasp on the world-building Ohtaka has set up and the relationships between all the characters. Volume eight wraps up one major arc and introduces the next, which may be interesting for readers who like to follow arcs rather than buy entire series. Magi is available from Shonen Sunday, an imprint of VIZ Media.